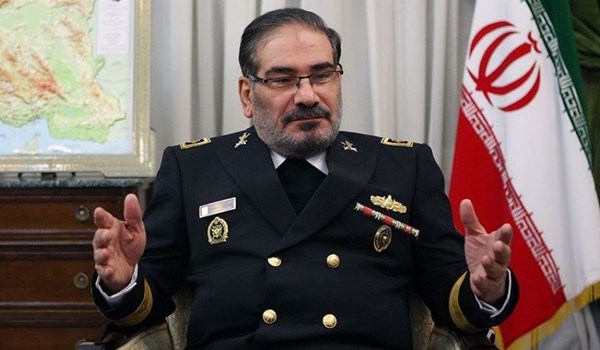 TEHRAN (FNA)- Secretary of Iran’s Supreme National Security Council (SNSC) Ali Shamkhani said that the US policy of economic pressures and sanctions will not succeed due to his country’s counter-measures within the framework of active resistance.

Shamkhani made the remarks on his twitter page on Saturday, referring to Iran’s military operation codenamed Samen-ol-A'emeh during the Iraqi-imposed war on September 27-29, 1981, in which Iran broke the Iraqi Siege of the Southern city of Abadan.

“Breaking the Abadan siege that had been ordered by late Imam Khomeini (the founder of the Islamic Revolution) on September 27, 1981, made the illusionist Baath enemy face the miracle of the culture of resistance,” he said.

“The economic siege today by an enemy who thinks that is 1,000 times stronger than us, will lead to nowhere due to (Iran’s) active resistance,” Shamkhani said.

In relevant remarks last Sunday, Shamkhani had said that Donald Trump's drones would keep crashing with the active resistance of the Iranian nation, adding that the US’ ‘virtual drones’ would also collapse through this resistance.

Shamkhani described the American sinister attempts against Iran as ‘virtual drones’, noting that the United States will continue to fail against the Iranian nation in its plots to back terrorists and riots, re-imposition of arms restrictions and economic sanctions.

He emphasized that just as the Iranians had shot down the US intruding drone in June 2019, they will continue the same course in confronting the American policies to impose further defeats on Washington in virtual fields.

“Iran's downing of the US Global Hawk drone in Persian Gulf set off collapse of America's virtual drones. including its backing of riots, continuing arms restrictions and return of economic sanctions. With the Iranian people's active resistance, Trump's drones will continue to crash,” Shamkhani wrote on his twitter page.

A US-made Global Hawk spy drone was shot down by the Islamic Revolution Guards Corps (IRGC) on the Southern coasts of Iran in Hormozgan province in June.

The IRGC announced in a statement on June 20, 2019 that the US-made Global Hawk surveillance drone was brought down by its Air Force near the Kouh-e Mobarak region in the Central district of Jask after the aircraft violated Iran's airspace.

The RQ-4 Global Hawk unmanned aircraft system (UAS) can fly at high altitudes for more than 30 hours, gathering near-real-time, high-resolution imagery of large areas of land in all types of weather.

Meantime, a US official said a US Navy MQ-4C Triton high-altitude drone was shot down by Iranian surface-to-air missile.

Iran has downed many other US drones as well, and they have always started reproducing them after conducting reverse engineering on them.