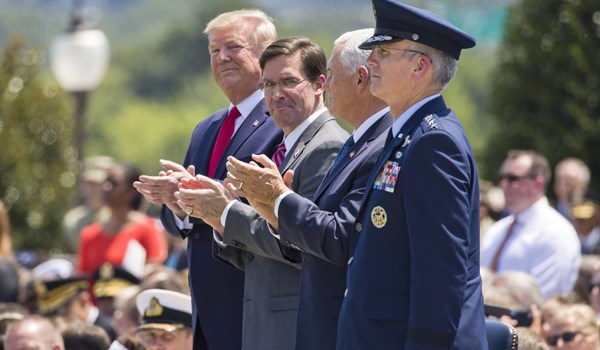 Some of the officers who signed the letter supporting Biden had retired only in the past few years, including Air Force Gen. Paul Selva, who served as vice chairman of the Joint Chiefs of Staff under Trump before he retired in August 2019; Vice Adm. Gardner Howe, a Navy SEAL leader who also retired last year; and retired Adm. Paul Zukunft, who oversaw the Coast Guard until 2018, NBC News reported.

The list of signatories featured 22 retired four-star military officers, among them Navy Adm. Samuel Locklear, who oversaw all US forces in the Pacific from 2012 to 2015, and Adm. Harry Ulrich, who commanded US naval forces in Europe during President George W. Bush's administration.

The retired top brass signed the letter backing Biden along with nearly 300 other former national security officials and diplomats. William Webster, the former director of the CIA and the FBI, was among the signatories, along with five former defense secretaries: William Perry, William Cohen, Chuck Hagel, Leon Panetta and Ash Carter.

"My own personal view is that I have a duty to be involved in civic matters of the nation that I'm a citizen" of, retired Adm. Steve Abbot said of his decision to sign the letter.

Abbot served as commander of the US Sixth Fleet and commander of Naval Striking and Support Forces in Southern Europe, and he later became Bush's acting homeland security adviser.

He added that he believed he had a duty to speak out as a citizen and that he was troubled initially by Trump's comments about the late Sen. John McCain in 2016.

"To hear someone say that John McCain was a loser and they don't like people who become prisoners, I just knew I was going to have trouble going forward with somebody who held those views," he noted.

"Over the past four years, I've seen what is a clear manipulation of our military to serve his personal needs," Abbot continued, stating, "The military has been a loyal, reliable constant in this country because of its apolitical nature. And here we had a president working to undermine it."

In August, more than 70 former senior national security officials — most of them Republicans who worked in previous GOP administrations — issued a similar letter throwing their support behind Biden, arguing that Trump had undermined America's role in the world. In the 2016 election, dozens of former Republican senior national security officials came out against Trump and became known as "Never Trump" Republicans. Many were blacklisted for jobs in the Trump administration for having signed the letters.

By law, military service members must remain apolitical while in uniform, but most senior officers stay out of the political arena even after they hang up their uniforms. Although the number of retired senior officers wading into politics has steadily increased over the past two decades, Thursday's letter was notable for the sheer number of top brass from every branch of the military who chose to endorse Biden.

"We are Republicans, Democrats, and Independents. We love our country. Unfortunately, we also fear for it," they wrote.

"While some of us may have different opinions on particular policy matters, we trust Joe Biden's positions are rooted in sound judgment, thorough understanding, and fundamental values," they wrote.

"The current President has demonstrated he is not equal to the enormous responsibilities of his office; he cannot rise to meet challenges large or small. Thanks to his disdainful attitude and his failures, our allies no longer trust or respect us, and our enemies no longer fear us," the letter added.

"Climate change continues unabated, as does North Korea's nuclear program. The president has ceded influence to a Russian adversary who puts bounties on the heads of American military personnel, and his trade war against China has only harmed America's farmers and manufacturers," it announced.

A number of retired ambassadors also signed on, including Robert Blackwill, who was Bush's deputy national security adviser; James Cunningham, who was ambassador to Israel and Afghanistan under both Republican and Democratic administrations; and Robert Ford, a former ambassador to Algeria and Syria.