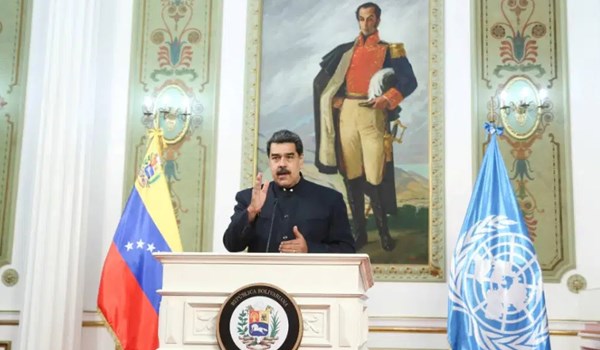 “We must demand the cessation of all unilateral coercive measures, of all the alleged sanctions, and that they allow our people to exercise their own rights,” Maduro said in video remarks before the UN, Al-Jazeera reported.

The administration of US President Donald Trump has ramped up sanctions against Venezuela in the past two years as part of an effort to oust Maduro.

Earlier, Maduro also condemned “hegemony” and “imperialist ideas” before the UN body, urging world leaders to unite in the face of the coronavirus pandemic.

“Venezuela supports a multipolar world, a renewed UN system, a system that knows how to enforce international law and protect the people of the world,” he stated, while condemning Trump’s attacks on the World Health Organization (WHO).

“This is not the time to insult, to threaten the WHO, it is now the time to unite in its favour,” he added.

Cuba and Nicaragua are two of Maduro’s only remaining allies in Latin America, after left-leaning leaders lost power in countries such as Brazil and Ecuador.

Trump has rolled back a detente with Havana, Washington’s old Cold War foe, that was pursued by his predecessor Barack Obama.

The Trump administration has also sanctioned Nicaraguan individuals and companies in response to what it calls corruption and repression under President Daniel Ortega.

In a later video address, Venezuelan opposition leader Juan Guaido – who is recognised as the legitimate president of Venezuela by dozens of countries including the US – urged the international community to take “decisive action” to oust Maduro, without being specific.

“Today I call upon all representatives of the member states … to consider a strategy that contemplates different scenarios after the diplomatic route has been exhausted,” Guaido told representatives of over 30 countries that recognise him.