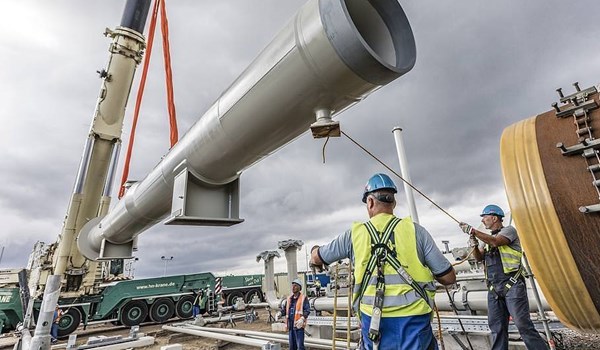 "We condemn calls for forging a certain coalition against the pipeline, wherein German and other companies have already made multi-billion investments," the diplomat stated, TASS reported.

The Nord Stream 2 project envisages the construction of two pipeline strings with a total capacity of 55 bln cubic meters per year from the coast of Russia through the Baltic Sea to Germany. To date, 93.5% of Nord Stream 2 has been finished. The construction was suspended at the end of 2019 when the Swiss pipe-laying company Allseas stopped work due to US sanctions.

On Tuesday, Russia’s foreign intelligence service SVR has exposed some Western countries’ involvement in fueling the Alexey Navalny case, with the Nord Stream 2 project being the main target, SVR Director Sergei Naryshkin said in a statement issued by the SVR press bureau.

"The SVR has observed intensive activity by some Western countries in fueling the so-called Navalny case. It is increasingly evident that the Nord Stream 2 gas pipeline project is one of the main targets," he noted.

Naryshkin said the efforts to block this project, disguised as a "means of punishing Russia for Navalny" were a typical example of unfair competition for the European gas market.

"It is extremely important for Washington to have this project aborted, because it calls into question the White House’s plans for stepping up supplies of US liquefied gas to Europe," Naryshkin specified.

The intelligence chief added the following points were very telling: US President Donald Trump’s calls addressed to Germany to quit Nord Stream 2, US Secretary of State Michael Pompeo’s statements about including the gas pipeline project in the new version of the Countering America’s Adversaries Through Sanctions Act and threats from several Republican senators to the authorities of Germany’s port Mukran.

"Alongside such outspoken demarches, the Americans have unleashed a campaign of pressure against European countries through various confidential channels to demand the blocking of Nord Stream 2. In a situation like this it is not surprising that the project has come under the most odious attacks from Poland, Lithuania, Latvia, Estonia and Ukraine, which fall over themselves to demonstrate their usefulness to Washington," Naryshkin noted.

He stressed that the logic of the Western countries’ speculations to the effect that Russia’s income from energy cooperation with Europe was being used to create threats to European stability did not hold water.

"It might have been said just as easily that US export revenues are used for crackdowns on protesters in Portland, or the money France earns by selling its wines and oysters help beat up the ‘yellow vests’. We don’t go as far as such absurdities," Naryshkin stated.

He believes that most Europeans are aware that the refusal to participate in the project would cause them much harm. The resource base for rebooting the European economy would be considerably narrowed in a situation where the economic slump in Europe, according to Deutsche Bank estimates, will reach 8.6%. Also, the problem of employment amid the coronavirus crisis would get worse.

The top intel official hoped the EU’s common sense would prevail ahead of the winter season, warning, "I do hope that the EU will not shoot itself in the foot. Even more so since weather forecasts promise a cold winter and gas will be in great demand."