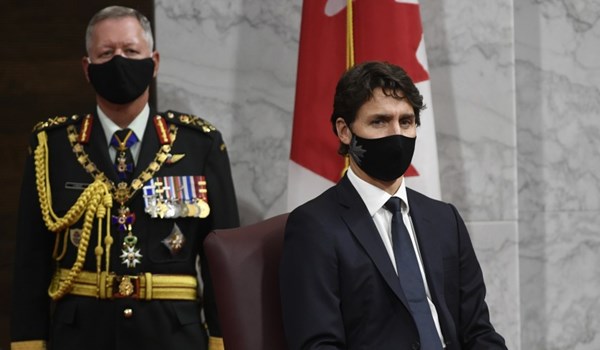 “We’re on the brink of a fall that could be much worse than the spring,” Trudeau said Wednesday during a 12-minute takeover of suppertime television, POLITICO reported.

“It’s all too likely we won’t be gathering for Thanksgiving [October 12], but we still have a shot at Christmas,” he added.

During the height of the pandemic last spring, Trudeau took questions from reporters almost every day for weeks — briefings that networks covered voluntarily. On Wednesday evening, he took the rare step, for a Canadian prime minister, of requesting airtime on major TV networks.

Trudeau’s warning comes as Canadian COVID-19 cases climb higher, a setback that follows the country’s success in flattening the curve earlier in the pandemic.

Trudeau noted that back on March 13 when the country went into lockdown there were 47 new cases of the virus.

“Yesterday alone, we had well over 1,000," said Trudeau, who appeared on TV screens in a dark suit and tie, standing in front of four Canadian flags and a desk.

Canada’s top doctor warned this week that the only way to prevent the acceleration of the spread is if everyone works to put on the brakes.

“My message today is the time is now,” Chief Public Health Officer Theresa Tam noted, adding, “Our actions right now are what matters for keeping epidemic growth under control.”

On Wednesday, officials announced Canada saw an average of 1,123 cases reported daily during the past seven days, compared to just 380 cases reported per day in mid-August.

The TV appearance came just a few hours after a longer political address — the Trudeau government’s Speech from the Throne.

Much like State of the Union addresses in the United States, Canada’s Throne Speeches highlight a government’s high-level policy direction and principles.

Trudeau’s Throne Speech outlined his minority government’s updated plan to deal with the economic and health damage of the coronavirus. Without offering price tags, it vowed sweeping investments to bolster areas like the economy, the social safety net, environmental protection and the labor force.

The prime minister used much of his time on TV to promote his government's new plan. He also went through his government’s efforts to date to deal with the health and economic crises of the pandemic.