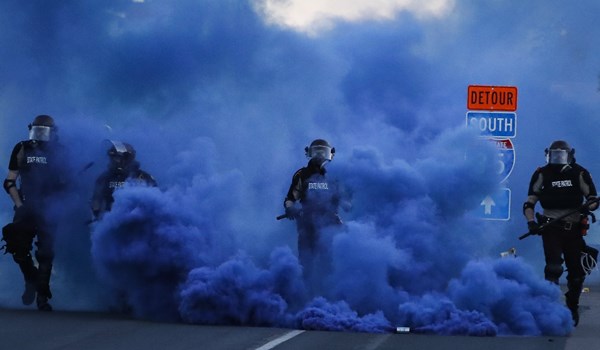 At a campaign rally in Minnesota on Saturday, the US president said police actions towards Ali Velishi were also an example of “law and order”, as he praised the deployment of the National Guard to stop demonstrations this summer, The Independent reported.

The president’s apparent praise for police violence came four months on from demonstrations sparked by the police killing of George Floyd in Minnesota’s largest city, Minneapolis.

Velishi had been struck with a rubber bullet by Minneapolis law enforcement on May 30, whilst trying to report on protests sparked by Floyd’s death just five days earlier.

Describing the moment MSNBC’s reporter was hit, whilst incorrectly saying Velishi was struck with a tear-gas canister, Trump told the crowd, "He went down. He was down”.

“[And] Nobody cared. These guys [law enforcement] didn't care. They moved him aside”, he continued.

“It was the most beautiful thing,” added the president, whose supporters cheered.

”Wasn't it really a beautiful sight? It's called law and order," he said.

Issuing a statement shortly after Saturday’s rally, MSNBC said “freedom of the press is a pillar of our democracy.”

A spokesperson added, “When the president mocks a journalist for the injury he sustained while putting himself in harm’s way to inform the public, he endangers thousands of other journalists and undermines our freedoms.”

Velishi’s injury was among multiple media personnel and reporters who were attacked by law enforcement whilst covering this summer’s anti-racism protests.