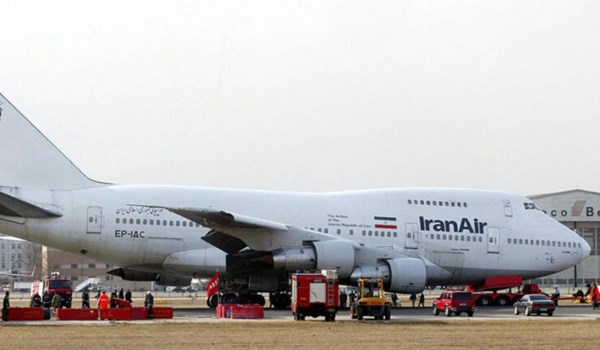 TEHRAN (FNA)- Iranian experts succeeded in overhauling a 50-year-old Boeing 747 cargo plane amid harsh US sanctions against the country.

“The Boeing 747 is 50 years old but it joined Homa (the national flag-carrier branded as Iran Air) in 2008 and Iranian specialists have overhauled it under the conditions of sanctions,” Homa's senior repair technician Rahim Baqban told reporters on Monday.

He added that the CEO of Boeing company has appreciated Iran for flying the company’s planes for 50 years with high safety.

Baqban said that the overhauled Boeing 747 is a wide-body plane used for humanitarian measures and assisting people damaged by natural disasters.

"Today, repair and maintenance of different aircraft from light to heavy airplanes is carried out by the specialists and experts of the aviation industry," Dehqani Zanganeh said.

He added that several domestic knowledge-based companies in the country produce the most complicated parts needed by the aviation industry.

“The overhauled jets are of F-4, F-14, F-27, Sukhoi and Mirage types, as well as C-130 and 707 transport aircraft,” Brigadier General Hatami said in a ceremony where eight domestically-overhauled military aircraft were delivered to the Iranian Army on February 20.

The Iranian Defense Minister also noted that the tech-savvy countries have refused to provide Iran’s Air Force with even the smallest spare parts and services it needs under threats from the US and its allies as well as tough sanctions and an all-out economic war against the Islamic Republic over the past 40 years.

He, however, noted that Iran has taken important measures in the aviation field that prove its self-confidence in neutralizing sanctions.