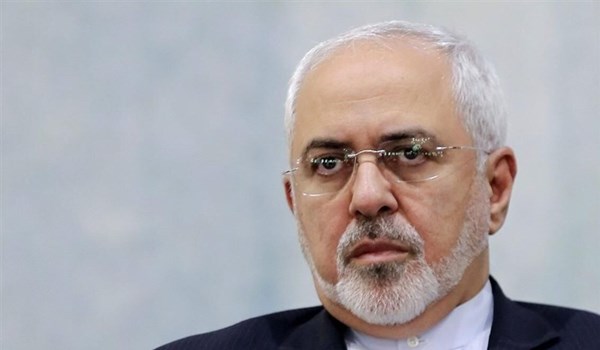 TEHRAN (FNA)- Iranian Foreign Minister Mohammad Javad Zarif said American President Donald Trump had better prevent his Secretary of State Mike Pompeo from turning the US into a figure of fun in the world, stressing that the UN Security Council has rejected Washington’s request on restoration of Iran’s arms bans.

Zarif advised the US top officials to change their policies vis-à-vis the international community and stop defying global rules and regulations as most of the countries have not accepted the US unilateralism in the UN.

He wrote on his Twitter account on Sunday that the UNSC member states have not surrendered to the US dictate to re-impose Iran’s arms embargo and they intend to live freely.

The world says NO Security Council sanctions were restored.

But Mr. "We lied, We cheated, We stole" threatens to punish a world that refuses to live in his parallel universe.@realDonaldTrump should change tack before @SecPompeo further turns #MAGA into a global laughing stock. pic.twitter.com/PeOgJRR2SZ

Iran’s top diplomat went on to say that Mike Pompeo should be stopped before he turns the United States into a laughing stock in the world.

Zarif emphasized that the US leaders’ deceitful measures just backfire so that they themselves are being entrapped.

The issue with mythomaniacs— who just can't help themselves in their pathological lying—is that they actually get lost in their own web of deceit.

In relevant remarks on Sunday, Iranian President Hassan Rouhani warned of his state's firm response to any US effort to reinstate the UN Security Council sanctions against Tehran.

“The US failed in forming a coalition against us and it made every attempt in the past month to stand against the removal of arms trade ban on Iran,” Rouhani said, addressing a cabinet meeting in Tehran on Sunday.

“The UN Security Council’s indifference to the US was the best method,” he added.

Rouhani said Iran has always underlined that the only way to speak with the Iranian nation is the language of respect, and added, “As Iran's president, I declare that if the US resorts to bullying and repeats its wrong words that it has reinstated the sanctions, words that no one accepts, and then takes practical steps, it will certainly face our firm response.”

He said that Iran has never surrendered to the US bullying and will continue its present path and course of action.

President Rouhani also addressed the G4+1 (Russia, China, Britain, France and Germany), and said if they comply with their undertakings as envisaged in the Joint Comprehensive Plan of Action, Iran will also fully return to its nuclear deal undertakings.

“The Islamic Republic of Iran will not unilaterally comply with any agreement whose balance has been disturbed,” he said.

TEHRAN (FNA)- The Chicago Police Department said a woman stabbed a store employee 27 times while another woman held him by the hair after they were asked to wear a face mask inside a store.
﻿
﻿
Sections