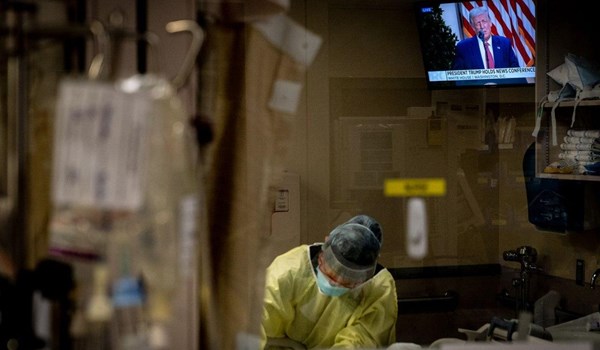 TEHRAN (FNA)- The total number of deaths in the US from the novel coronavirus pandemic passed 200,000 on Saturday, the highest death toll in the world.

There have now been 6.76 million confirmed cases of COVID-19 across the country since the virus was first identified, as the grim milestone was reached on Saturday morning according to data collated by NBC News.

According to the Institute for Health Metrics and Evaluation (IHME) at the University of Washington, a surge in new infections in the autumn and winter could result in a total of 415,000 American deaths by January.

As colder weather forces people indoors, it is feared that this could spur a new wave of infections unless people maintain their vigilance to stop the spread.

Experts continue to implore people to wear face masks to limit aerosol spread of the virus, as well as a continued adherence to a hand washing regimen. They also advise that everyone get their annual flu vaccination.

The sobering figures come even as infections have spread into younger, healthier parts of the population who are more likely to survive.

Treatment of patients has also advanced since the early days of the pandemic, but nevertheless the disease remains especially deadly to those with comorbidities.

The first US death from COVID-19 was initially thought to be in the Seattle area in late February, but post-mortem testing later revealed the virus was responsible for deaths in California three weeks earlier.

Alarming data from Europe shows a large scale resurgence in the number of cases of the virus leading to the renewal of lockdowns and other restrictions.

It is feared that complacency about coronavirus may lead to a similar uptick in the US, where politicised fights about the wearing of masks continue, much to the frustration of health and civic officials.

Robert Redfield, the director of the Centres for Disease Control and Prevention, told US lawmakers this week that a potential vaccine for COVID-19 is not expected to be widely available until the summer or early autumn of 2021.

Globally, more than 30.55 million people have been infected by the coronavirus. The worldwide death toll now exceeds 950,000.