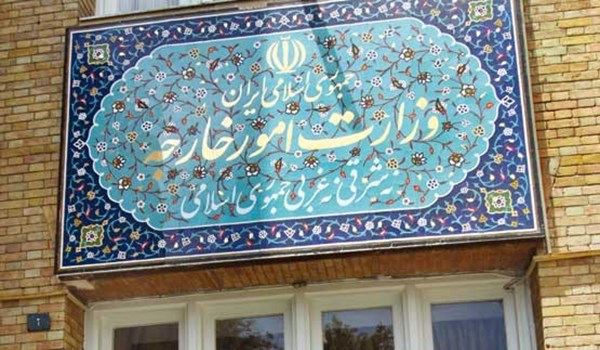 TEHRAN (FNA)- The Iranian foreign ministry in a statement on Sunday blasted the US for its claims about re-imposition of the UN Security Council sanctions as “baseless" and a violation of the UNSC decision, warning that Tehran would not hesitate to respond to any illegal imposition of the suspended resolutions.

“The US Secretary of State knows himself that his claim about revival of the UN Security Council sanctions is baseless and void and has no legal effect, and therefore, in his familiar method, he has threatened and intimidated countries to impose national extraterritorial sanctions against them, which is the best evidence of the US acknowledgment of its failure at the Security Council,” the statement said.

“As the Islamic Republic of Iran has repeatedly emphasized, the US regime is the greatest threat to world peace and security; the reality that the US openly intimidates and threatenes the world and does not care about the Security Council resolutions has never been as evident as today,” it added.

The statement noted that when the US left the nuclear deal in 2018, it hoped to make Iran surrender or collapse under maximum pressures, but it failed as Washington is more isolated than ever and has now resorted to bullying and blackmailing the international community.

“The current US regime's approach is a major threat to the international peace and security and an unprecedented threat to the UN and the UN Security Council. This time, the US Secretary of State is not only mocking all the principles of international law and the UN Charter, but he is also openly challenging the international community, changing his government's bullying and rogue attitude from a behind-the-scene action to a blatantly overt move,” it added.

“The Islamic Republic of Iran emphasizes that if the US, directly or with the cooperation of a number of its allies, makes any move in line with these threats, it will face a serious reaction and should account for all its dangerous consequences,” the statement warned in conclusion.

In relevant remarks earlier today, Iranian Foreign Ministry Spokesman Saeed Khatibzadeh blasted US Secretary of State Mike Pompeo's bullying remarks to force other states to accompany Washington's sanctions against Tehran, and said the US has proved to be a rogue state defying international rules and laws.

“Pompeo is after another bullying. I believe that these are the most bitter days and hours for the US. The US has opted to stand on the wrong side of the history and has forgotten its responsibilities,” Khatibzadeh told reporters in a press conference in Tehran on Sunday.

Khatibzadeh said that the era of air, sea and ground piracy has ended.

Elsewhere, he described the nuclear deal as a negotiated, summed up, signed and sealed agreement, and said, “Any measure which seeks to break the seal, means the end of the nuclear deal and we expect all countries to remain committed to the principles of the international relations and legal undertakings.”

Khatibzadeh warned of Iran’s harsh reaction to measures outside the norms and laws.

The US unilaterally proclaimed on Saturday that UN sanctions against Iran are back in force and promised to punish those who violate them, in a move that risks increasing Washington’s isolation but also international tensions.

“Today, the United States welcomes the return of virtually all previously terminated UN sanctions on the Islamic Republic of Iran,” Pompeo said in a statement.

Iranian Foreign Minister Mohammad Javad Zarif said on Thursday that the US is not a participant to the Joint Comprehensive Plan of Action (JCPOA) to use the trigger mechanism, and urged Pompeo to read UNSC Resolution 2231.

Related News
Iran Calls for Global Active Defiance of US Bullying
Zarif Warns US Leaders Not to Turn US into Global Laughing Stock
Envoy: Washington in More Isolation at UNSC
LATEST STORIES (68)