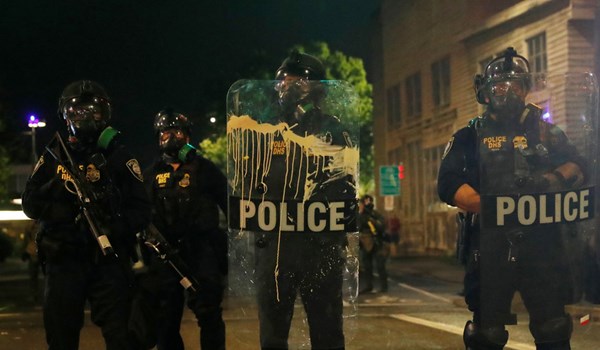 TEHRAN (FNA)- After wildfires caused a rare break in rioting, demonstrators in Portland resumed their nighttime activities, this time targeting an Immigration and Customs Enforcement (ICE) facility, while they were swiftly pushed back by police.

Portland has been a hive of unrest since the death of George Floyd earlier this summer, with demonstrations only pausing when wildfires encroached on the city over the last week. However, the blaze receded and smoke cleared on Friday, prompting activists to march on the ICE building at nightfall, RT reported.

The crowd was met by police and federal agents, who say they were pelted with projectiles. Federal agents first pushed the protesters back from the ICE building, before the Portland Police Bureau declared the gathering an unlawful assembly and swooped in to arrest anyone refusing to disperse.

Dramatic footage shared on social media shows agents tackling rioters to the ground. Though an edict from Portland Mayor Ted Wheeler forbids the city’s police from using tear gas, the streets were filled with what looked like smoke and gas, possibly deployed by federal agents. Some reports on social media suggested that tear gas was used by police.

The Portland Police Bureau announced in a statement that 11 rioters were detained. Their charges include disorderly conduct, assault of police officers, possession of stolen goods, and unlawful weapons use.

The summer of unrest has angered some Portland residents, among them business owners tired of having their storefronts smashed and their premises looted. During Friday night’s activities, protesters were pelted with eggs from an apartment window. The crowd hurled abuse at the resident in response.

By Saturday morning, plans were already being drawn up for another night of protest, according to a poster which made the rounds on social media. The demonstration will be in memory of Supreme Court Justice Ruth Bader Ginsburg, who died aged 87 on Friday.