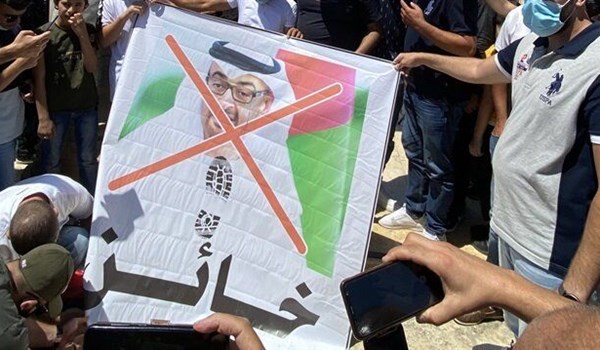 TEHRAN (FNA)- Scores of people in the Yemeni island of Socotra rallied against the recent revelations of Arab-Israeli normalization deals.

Holding hand-written placards in support of Palestine on Saturday, the protesters rejected the controversial normalization of ties between Israel and the two Arab countries of the United Arab Emirates and Bahrain, presstv reported.

US President Donald Trump presided over the signing ceremony of the normalization agreements between Israel, the UAE and Bahrain at the White House on Tuesday.

However, Palestinians and other Muslim states rejected the treaties with Israel, as a betrayal of the Palestinian cause against the Israeli occupation.

The islanders, who were carrying Yemeni flags, also rallied against UAE colonial schemes for Socotra Archipelago, part of Yemen seized in June by the UAE-backed so-called Southern Transitional Council (STC), demanding the withdrawal of the occupiers.

The violence in Socotra comes after the UAE-backed separatists declared self-rule in Yemen’s South earlier this year and seized control of the city of Aden, sparking fears of fresh chaos in a country already embroiled in five years of conflict.

Last summer, the UAE announced it was ending its role in the conflict. However, observers believe the Persian Gulf Arab country continues to be active through its proxies.

Before its withdrawal, the UAE set up a military base in Socotra, which enjoys a strategic location overlooking a vital international shipping lane.

It also awarded Emirati citizenship to hundreds of residents and has recruited scores of others to help consolidate its grip over the island.

The separatists have long sought Southern Yemen to secede.

Earlier in June, just three months before the clandestine UAE-Israel dealings made public, an article in Israel Today said the UAE-backed Yemeni separatist were “secret friends” with the Tel Aviv regime.

The report also states that many Israelis reacted positively and welcomed the developments of a “new autonomous state in Yemen”, with sources telling Israel Today that Tel Aviv has been conducting secret meetings with the STC.

Recently and after a decision by the UAE to effectively withdraw its forces from Yemen, the group turned its weapons on rival militants loyal to ex-president Abd Rabbuh Mansur Hadi.

The infighting has highlighted deepening divisions between Saudi Arabia and the UAE, the two countries that are leading the war on Yemen.

Ties between the two sides have soured over a number of issues, including what the Yemenis view as Abu Dhabi’s intention to occupy Socotra Island and gain dominance over major waterways in the region.

The island was part of Yemen’s Eastern province of Hadhramaut but it was introduced as an independent province in a 2013 presidential decree.

Home to some 60,000 people, Socotra sits at the entrance to the Gulf of Aden. The island has a unique ecosystem and been listed by UNESCO as a world natural heritage site.

There are reports that Hadi leased the islands of Socotra and Abd al-Kuri to the UAE for 99 years before resigning and fleeing the country to Riyadh in 2014.

Saudi Arabia and a number of its regional allies launched a devastating war on Yemen in March 2015 in order to bring Hadi back to power and crush the Houthi Ansarullah movement.

The Western-sponsored bombing campaign has plunged Yemen into what the UN says is the world's worst humanitarian crisis.

According to a tally released last November by the Armed Conflict Location and Event Data Project or ACLED, more than 100,000 Yemenis have been killed in the Saudi offensive.