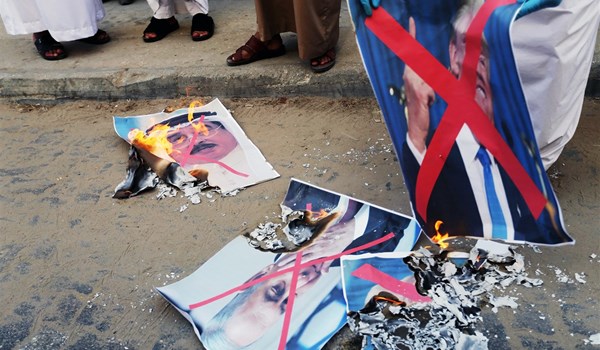 TEHRAN (FNA)- Iraq’s Shia cleric Muqtada al-Sadr said Israel will mark its own ending by opening its embassy in Iraq amid some reports about Tel Aviv considering opening its virtual diplomatic mission in the Arab country.

The prominent Shia cleric made the comment during a sermon at the Friday prayers, warning the “enemy of God [Israeli Prime Minister] Benjamin Netanyahu”, who has “evil intentions” toward Iraq, about possible “coming” to the Arab country or even “thinking about establishing an embassy” there, presstv reported.

Sadr’s warning was an apparent reaction to some unconfirmed reports that Tel Aviv is seeking to establish its virtual embassy in Baghdad, which, in turn, allegedly wants to open its own in Israel.

Addressing the Israeli premier, Sadr further warned him that if he took such actions, he would “mark the end” of the occupying entity, “according to the Holy Quran”.

Bahrain and the United Arab Emirates (UAE), two Persian Gulf Arab states, have signed controversial and US-brokered normalization agreements with Israel. It took place during a ceremony in Washington on September 15.

The event was condemned by many Arab and Muslim figures as a flagrant betrayal of the Palestinian cause.

“Addressing the oppressed in the East and the West of the world, I say that normalizing ties with the Zionist regime will only bring humiliation,” further said Sadr.

“Palestine is alive in our conscience,” he said.

Earlier, the Iraqi cabinet's Spokesman Ahmed Mulla Talal had stressed that any normalization of relations with the Israeli regime is strictly forbidden under the Iraqi constitution.