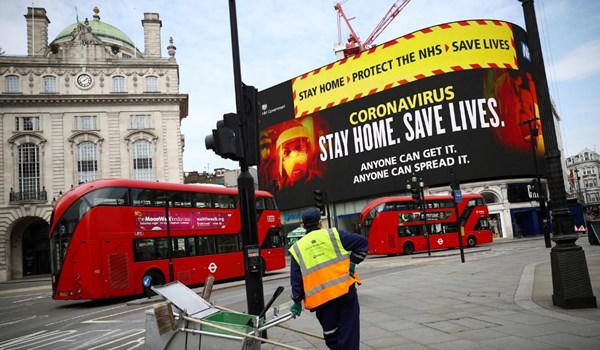 TEHRAN (FNA)- The number of novel coronavirus infections across the UK may be doubling as quickly as every seven days, the government’s scientific advisory body warned.

The latest estimate for the R transmission rate estimate for the UK is between 1.1 and 1.4, while the number of new infections is growing by up to 7 per cent every day, The Independent reported.

The Scientific Advisory Group for Emergencies (Sage) said it was “concerned” that the current doubling time “could be as quick as every seven days nationally, and potentially even faster in some areas of the country”.

The group stated, “It’s even more important for people to remain disciplined and adhere to the current rules.”

Kevin McConway, emeritus professor of applied statistics at the Open University, noted the latest figures were “undoubtedly concerning … the number of new cases could grow to high levels quickly if the interventions are not sufficiently effective”.

It has also emerged Prime Minister Boris Johnson’s government was told by senior scientific advisors earlier this month that only 6 percent of the UK population had antibodies to the coronavirus, according to minutes of the meetings released on Friday.

The Sage group warned that current levels of immunity in the UK population were unlikely to mitigate the impact of “a significant winter resurgence” of the virus.

Worryingly, the scientists also suggested there was evidence showing antibodies only offer immunity for between two to three months.

“Evidence from serology studies suggest a small proportion (around 6 percent) of the UK population has antibodies to COVID-19,” according to the Sage minutes from September 3.

“There is evidence of antibody levels waning over 2-3 months (medium confidence),” it added.

The R rate in the Northwest of England and Midlands is the highest in the country at between 1.2 and 1.5. It is estimated at between 1.1 and 1.4 in London and the Southeast.

In the East of England the R rate is somewhere between 1 and 1.3, while in the Southwest it lies between 0.9 and 1.6.

The latest local lockdown measures, which come into force on September 22, will prevent multiple households in all affected areas from mixing in private homes and gardens – while a 10pm curfew will be imposed on pubs and restaurants across parts of the Northwest.