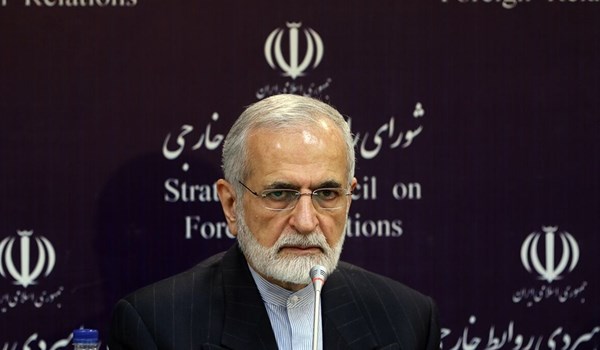 TEHRAN (FNA)- Chairman of Iran's Strategic Council on Foreign Relations Kamal Kharrazi blasted Washington for its continued hostilities towards Iran, and said that under Article 51 of the UN Charter on the inherent right to self-defense, Iran is authorized to respond promptly to any US aggression on the pretext of the return of the sanctions.

"The US claim is so baseless and meaningless that even America's close allies consider it illegitimate; because after the withdrawal of the US from the Joint Comprehensive Plan of Action, Washington has no right to use the trigger clause in JCPOA or Resolution 2231," Kharrazi said while commenting on the US claim of the return of UN Security Council sanctions, including the arms embargo on Iran.

He reiterated that of course, the US, which with its unilateralist policy does not care about international institutions and tries to impose its unreasonable policies on others, does not need to rely on the UN Security Council's resolutions in order to implement its illegitimate demand to extend the arms embargo on Iran, as it is intending now to block Iran's arms deals by threatening others with secondary sanctions, he said.

"Of course, Trump's presidency was important because the US' nature became clear to the world during his term. Today, the absurdity of Americans' deceptive slogans and their instrumental use of international institutions against others have become clear to everyone," Kharrazi added.

In relevant remarks in July, Kharrazi said that the Iranians have shown over the past 40 years that they would never surrender to the US bullying.

"The unilateral and misguided policies of the three European member states of the JCPOA, led by the US, to stop Iran's peaceful nuclear activities have always backfired, as Iran has been more determined to develop its nuclear technology," Kharrazi said.

He reiterated that the US push to extend Iran's arms embargo in the UN Security Council and the three European countries' anti-Iran move in the International Atomic Energy Agency, as well as the suspicious behavior of the IAEA director general will not only fail to deter Iran, but it will undoubtedly lead to the collapse of JCPOA as well.

"Now that International Atomic Energy Agency Director-General Rafael Grossi has met US Representative on Iran Brian Hook shows the extent of Mr. Grossi's dependence and his lack of independence," Kharrazi said, adding that the IAEA chief is recklessly coordinating his actions with the conspiracy center against Iran.

He underlined that the West should know that neither economic sanctions nor arms embargo will deter Iran from pursuing an independent strategic path.

"Iran has so far pursued its policy of self-sufficiency in the face of maximum Western pressure and has achieved undeniable successes in producing defensive weapons it needs," Kharrazi added.

Related News
Military Official: General Soliemani Assassinated in Retaliation for US Failures in Middle-East
Senior Lawmaker: Parliament Ready for Counter Measures against US Trigger Mechanism
Gov’t Spokesman: US Unable to Further Manipulate UN against Iran
Iran Warns US against Trump's Efforts to Illegally Extend Arms Ban
Legal Advisor: US Zooming on Destruction of Lives of Millions of Iranians
Iran: Pompeo Desperately Attempting to Clean US Face
Iran: US, Defying N. Deal Parties Not Entitled to Use Trigger Mechanism
LATEST STORIES (32)