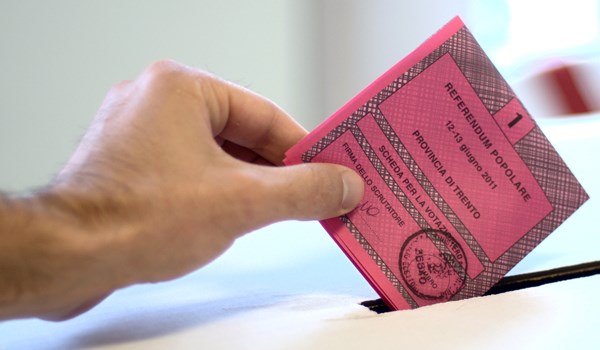 TEHRAN (FNA)- Italians are heading to the polls this weekend for regional elections, and to vote on changes to the constitution, in what is seen as a key test of public support for the government after the country was ravaged by the coronavirus.

Italians will be voting on September 20-21 for the presidency of seven regions (Tuscany, Valle d’Aosta, Liguria, Marche, Apulia, Veneto and Campania) as well as in a long-awaited constitutional referendum on whether to reduce the number of members of parliament from 945 to 600, a move that analysts expect to be approved with little fanfare, CNBC reported.

It’s the regional elections — that will see 35% of Italy’s electorate go to the polls — that are more unpredictable, according to experts.

Four out of seven regions — Apulia, Marche, Tuscany and Campania — are currently governed by the center-left Partito Democratico (PD), the party currently in a national coalition government with the Five Star Movement (M5S) and junior partner, Italia Viva.

Italy’s economy has been hit hard (the Bank of Italy forecasts a decline in GDP of around 9.5% for 2020) and the elections would also be seen as a test of the strength for the right-wing opposition, led by Lega.

“The elections are unlikely to trigger a political crisis, and our base case is that the government will remain in power after the vote. That said, we believe the event is a headline risk to its stability,” Luca Pennarola, European economist, and Eric Oynoyan, senior G-10 rates strategist, at BNP Paribas said in a note Wednesday.

“Although there is no constitutional requirement for the government to hold a majority in regional governments, these elections have sparked political crises in the past,” they added.

Particular attention is being paid to the regional election in Tuscany, formerly a PD stronghold, as it is seen as a bellwether for support for the anti-immigration Lega party under Matteo Salvini. The vote is currently too close to call, polls suggest. BNP Paribas’ analysts noted that a loss for the PD could have repercussions on the leadership of the party.

Being on the sidelines of government has not hurt Lega’s popularity which has grown considerably under Salvini’s controversial leadership. The party is looking to consolidate or extend its power base further in the forthcoming votes and can build on a strong foundation: In the regions going to the polls, Lega currently holds the presidency in Veneto, and its candidate who heads up a center-right coalition is expected to retain the leadership there, predictions show.

Meanwhile in Liguria, a center-right party (Cambiamo) which is in a coalition with Lega currently holds office and is expected to retain the presidency. The other region going to the polls, Valle d’Aosta, is currently governed by a regionalist alliance (and no voter polls are available ahead of the election).

Characterizing the regional elections and constitutional referendum as “double trouble”, analysts at Barclays led by Ludovico Sapio said in a note Thursday that “while polls suggest the government will fare fairly well, a ‘home run’ scenario by the right-wing cannot be entirely ruled out”.

“A ‘Yes’ outcome at the referendum and a balanced result at the regional elections (with PD winning in Tuscany) would signal that the governing coalition is alive, kicking and likely to dodge the risk of fresh elections until, at least, the end of 2021,” they said.

“Neglecting the elections in Valle d’Aosta, for which peculiar rules apply and surveys on voting intentions are unavailable, polls suggest the more likely scenario is a balanced result at the six remaining regional votes,” they noted.

This balance, as well as a majority of the public approving constitutional changes “would foster the longevity of the yellow-red coalition government as both PD and M5S would cash in a victory”, they noted.

However, they said, a “No” outcome at the referendum and a sound defeat by PD in four or more of the regions, particularly if the party loses Tuscany, is “likely to have some repercussions for the governing coalition”.

“This would more likely materialize in a government reshuffle, possibly in favour of a broader coalition, rather than in new elections,” they added.