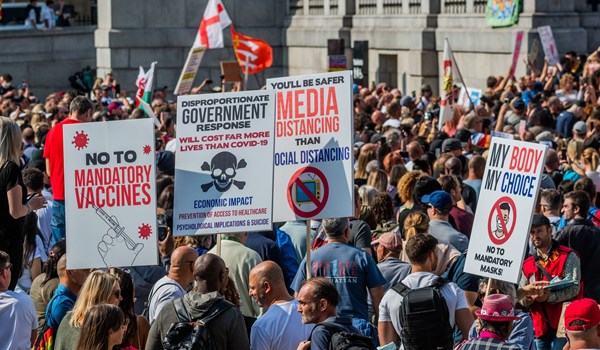 TEHRAN (FNA)- UK Police made 32 arrests during a demonstration in Central London against coronavirus restrictions and mass vaccinations.

More than a thousand people are estimated to have joined the rally in Trafalgar Square, among them 5G conspiracy theorists, coronavirus sceptics and “anti-vaxxers”, The Guardian reported.

Sections got into scuffles with police – some officers, with their batons drawn, were pushed back by crowds on the margins of the demo.

At least one protester was seen with a bloodied head while another was seen receiving medical attention on the ground, and London ambulance service announced that three patients were assessed with one taken to hospital.

By early evening on Saturday, the Metropolitan police said the area had been cleared.

The force added it attended the the Resist and Act for Freedom rally, which began at about midday, and attempted to encourage protesters to leave throughout the day.

“Despite this, protesters remained, putting themselves and others at risk,” it said, adding, “It is important to remember that we are still in the middle of a global pandemic, and the changes have been introduced to help control the spread of the virus, keep everybody safe and save lives.”

Dozens of officers, including some mounted on horseback, tried to break up ranks of protesters who had formed human blockades to prevent them making arrests, with loud cheering and chanting as they pushed back the police, according to The PA news agency.

Meanwhile, others attempted to calm the situation down. One man, speaking through a megaphone, stated, “Remember this is about peace. We don’t want no hooligans … I’m one of the ones who started this thing … So don’t come now and mess it up. Don’t come now and fight with the police.”

Elsewhere a group of young people performed a song in front of a line of police officers to de-escalate the situation, chanting, “Coronavirus, unruly like Miley Cyrus."

Among the crowds were people selling T-shirts bearing 5G conspiracy theories and advocating the legalisation of cannabis, with banners calling for government scientific advisers to be sacked and declaring COVID-19 a “hoax”.

Addressing the crowd to huge cheers, organiser and so-called “natural nurse” Kate Shemirani noted, “We are the resistance.”

The protest was advertised with an image showing a vaccine bottle and urging people to “Come together, resist and act”.

The confrontation came several hours into the rally when Shemirani called for men to head to the North-West corner of the square, where police were beginning to gather.

Aside from the flare-up, the gathering was largely peaceful, with protesters airing grievances ranging from opposition to coronavirus lockdown measures and masks, to child trafficking and the QAnon conspiracy theory gaining ground in the UK.

According to the NHS, vaccination is the “most important thing we can do to protect ourselves and our children against ill-health” – preventing up to three million deaths worldwide each year.

It warned that it is possible for infectious diseases to quickly spread if people stop using them – pointing to a spike in measles and mumps cases in 2016 and 2018.

There is no evidence that vaccines cause autism, allergies or other conditions, weaken the immune system in any way or contain harmful ingredients, the NHS added.

Since Monday, the number of people from multiple households who can attend social gatherings in England, whether indoors or outdoors, has been cut to six under new “rule of six” COVID-19 restrictions.

However, there are a number of exemptions, including for protests. In order to be exempted, protest organisers must take steps including demonstrating that they are a “political body” and complete a thorough risk assessment focusing on coronavirus.