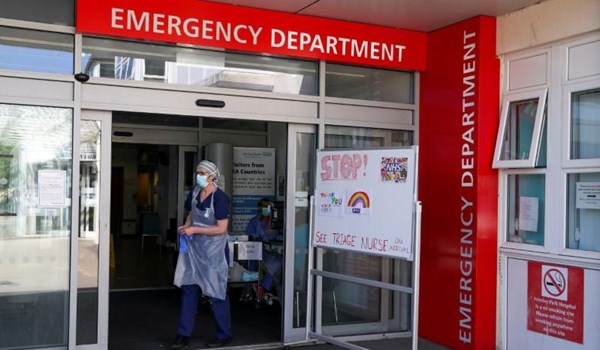 TEHRAN (FNA)- The UK recorded a further 4,422 new cases of coronavirus in the past 24 hours, while 27 more people have died.

Saturday’s figures mean there have now been 390,358 cases since the start of the pandemic and 41,759 deaths, The Daily Mirror reported.

It’s the second day in a row when the number of new cases has been above 4,000. There were 4,322 cases confirmed Friday– the first time since May when this threshold had been crossed.

Boris Johnson has admitted a second wave of infections is ‘coming in’ and is considering more stringent restrictions on daily life to try to contain the spread.

The Government’s figures cover deaths in all settings including care homes and the wider community.

Separately, NHS England has confirmed the deaths of a further 16 people who tested positive for coronavirus in hospitals.

Patients were aged between 69 and 97 and all had known underlying health conditions.

The dates of the deaths were between August 19 and September 18, with the majority on or after September 17.

The latest figures for Scotland show three more confirmed coronavirus patients have died, bringing the total number of deaths to 2,505.

A total of 24,126 people have tested positive for coronavirus – an increase of 350 from the day before. This is the highest daily figure for Scotland since April 25.

It comes just one day after Nicola Sturgeon warned ‘hard but necessary’ decisions may be needed in the coming days to prevent another national lockdown.

The First Minister said coronavirus ‘could get out of our grip again’ as Scotland faces the risk of ‘exponential growth’ of COVID-19.

She said this weekend will be ‘critical’ to how the Government plots a way forward, and added she wanted to give the nation ‘advanced notice’ that the ‘coming days are likely to see some hard but necessary decisions’.

Meanwhile, there have been two more deaths and 212 more cases reported in Wales and a further 222 new confirmed infections in Northern Ireland.

Scientists have warned the Government to act ‘sooner rather than later’ to avoid the surge in new cases leading to a steep rise in the death toll.

Prime Minister Boris Johnson is understood to be considering a ‘circuit break’ lockdown which would temporarily ban pubs, restaurants and leisure facilities from operating for two weeks.

The nation has been told to prepare for another six months of restrictions to combat coronavirus.

This approach would see the UK alternate through periods of stricter measures and intervals of relaxation in an attempt to avoid a full nationwide lockdown.