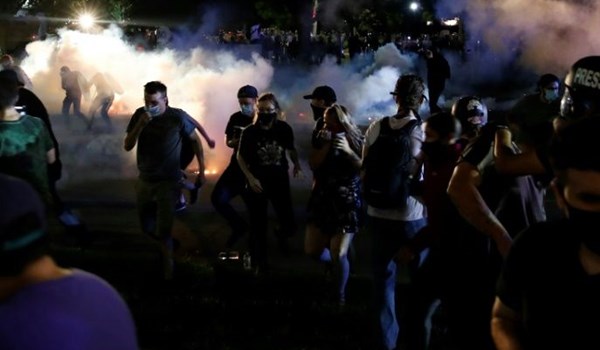 TEHRAN (FNA)- Protesters returned to the streets of Portland, Oregon, after wildfires that had effectively suspended the demonstrations cleared from the area.

Police announced in a statement early Saturday morning that an unlawful assembly was declared and that members of the demonstration were “engaged in criminal activity, including throwing items at officers”, The Hill reported.

Initial photos showed that smoke was used to disperse the crowd, and it appeared that law enforcement deployed tear gas.

The Portland Police Department is banned from using the chemical agent, though federal officers in the area are not subjected to such a prohibition.

Eleven people were arrested in total, with most charged with disorderly conduct.

Friday night’s protest marked the resumption of a string of demonstrations in the city since the death of George Floyd in Minneapolis in May. Many of the protests have remained peaceful, but national attention has been focused on Portland after videos emerged of protesters being detained by federal agents in unmarked vans, resulting in the protests swelling in size and intensity.

Riots had been declared at several points throughout recent months as protesters clashed with federal agents at various sites, including outside a US Immigration and Customs Enforcement building.

Protests were put on hold for over a week this month as wildfires have gripped much of the West Coast, including areas around Portland, emitting dangerously dirty air in the area.

President Donald Trump has seized on the demonstrations, urging local officials to request the National Guard be deployed.