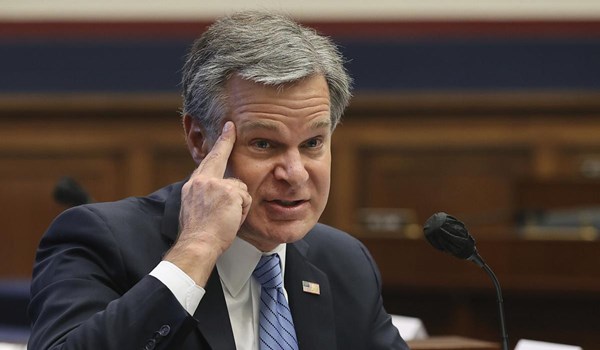 The president publicly criticised Christopher Wray this week for comments he made to Congress about Antifa and Russian interference in the upcoming elections, The Independent reported.

Wray angered Trump when he told US lawmakers that he viewed Antifa as an ideology not a terrorist organisation, which put him at odds with the White House.

In the hearing before the House Homeland Security Committee, Wray said that he regarded Antifa as a “real thing” but denied it was a terror group.

“We look at Antifa as more of an ideology or a movement than an organisation,” said Wray.

Speaking to reporters at the White House on Friday, Trump took the opportunity to go after Wray, who he appointed in 2017, and refused to rule out firing him.

“And when a man doesn’t say that, that bothers me. I wonder why he’s not saying that," he said.

The president was then asked directly if he planned on firing him as FBI director.

“We’re looking at a lot of different things. I did not like his answers yesterday,” said Trump.

“Im not sure he liked them either, I’m sure he would probably agree with me, Antifa is bad, really bad," Trump said.

Trump also jabbed at Wray for testifying about Russia’s “very active efforts” to meddle in the upcoming election, but not China’s.

The president has repeatedly sought to downplay Russian efforts to interfere in US elections in his favour, at one point even publicly backing Vladimir Putin’s denials over his own intelligence agencies’ conclusions.