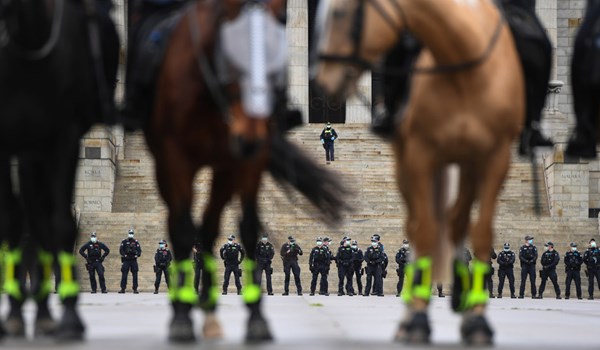 The tumultuous scenes unfolded on the third straight weekend of anti-lockdown protests in the capital of the state of Victoria, RT reported.

Organizers of the rally had kept the location secret until early Saturday in an attempt to avoid a police crackdown.

However, when the demonstration did get underway, the protesters were soon pursued by officers.

An eyewitness described the encounter as “chaotic”, with police disrupting the protest by chasing after the people who were present.

Demonstrators were seen jumping fences into private property to escape from law enforcement.

One of the people arrested was filmed by the Nine News outlet telling officers, “Wake up, I know you already know this is wrong.”

Despite the interference of the police, the protesters continued to voice their opposition to coronavirus restrictions in Victoria and criticism of the state’s premier, Daniel Andrews.

The police labelled the protest a “blatant breach” of the chief health officer’s directions.

The demonstrators have indicated there will potentially be further protests on Sunday.

Andrews urged residents of Victoria not to attend protests when announcing on Saturday that there had been 21 new coronavirus cases and seven more deaths in the state. It was the lowest number of new COVID-19 cases in Victoria since June 24.

The protests come as a proposal allowing police to preemptively lock up people they believe “might” violate coronavirus lockdown measures has gone before the Victoria state parliament.

The mooted law would allow police to indefinitely detain any resident of the state who either tests positive for COVID-19 or is a close contact of someone who has, as long as the officer believes they are “likely to refuse or fail to comply” with quarantine regulations.