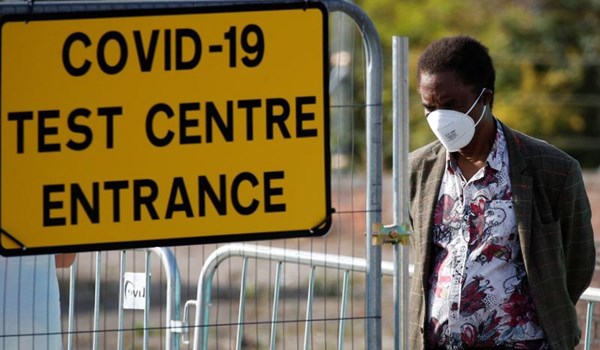 TEHRAN (FNA)- Demand for coronavirus tests is three to four times the number available, the director of NHS test and trace admitted.

Baroness Dido Harding, who told MPs there was capacity to carry out 242,817 tests a day, said the “sizeable” rise in demand had been unexpected, The Independent reported.

Prime Minister Boris Johnson has pledged to raise capacity to 500,000 by next month – but Baroness Harding’s estimates suggest that even that figure would not be enough to satisfy demand.

Figures on Thursday showed that the number of positive tests had increased by 167 percent week on week, while lockdown restrictions were introduced in the Northeast in an attempt to lower the rate of infection.

But, despite images of queues outside COVID-19 drive-in centres, the testing tsar said, “I strongly refute that the system is failing.”

In an appearance at the Commons Science and Technology Committee, she said it was “clear from today that demand is significantly outstripping the capacity we have” and there had been a “marked increase” in the number of parents bringing children forward for testing.

She added the number of people calling 119 or visiting the website to try to book COVID-19 tests was “three times the number of tests that we currently have available” – although some would involve double counting.

However, Baroness Harding insisted current capacity had been based on modelling provided by the government’s Scientific Advisory Group for Emergencies (Sage) and suggested that around a quarter of those seeking tests did not have symptoms.

Quizzed by the committee chair and former Tory minister Greg Clark on the current issues in the system, she said that the “constraint” in the testing was in processing and laboratories.

“We have to restrict the number of people who are taking tests in the testing sites so there’s no risk of those tests going out of date when they are processed in the labs,” she said, adding, “So I understand how frustrating it feels that when you arrive in the testing site and it doesn’t look like it’s very busy and you can see it could do more, but the capacity constraint isn’t in those testing sites, it’s back in the lab.

“It would be very dangerous to send too many samples back to the laboratory, have them not to be processed and people not know what their results were,” she added.

During the hearing, the boss of the NHS Test and Trace programme also said the government is drawing up a list of those who will be prioritised for COVID-19 tests, with hospital patients at the number one priority, followed by health and social care staff. Currently these three categories account for around 50 percent of all tests, she added.

She said more tests were also targeted in outbreak areas and then, among the wider population, key workers – especially teachers – could be given priority.

Before her grilling at the committee, Health Secretory Matt Hancock also faced considerable criticism from MPs over the chaos in the testing system.

His opposite number, Jonathan Ashworth, said the system has “become not so much test and trace, more like trace a test”, while senior Labour MP raised the case of a NHS worker constituent unable to get a test and claimed, “This isn’t just chaotic, it is dangerous.”

Their remarks came as the health secretary also unveiled tougher coronavirus restrictions for more than 1.5 million people across the Northeast of England, including a ban on households socialising and introducing a 10pm curfew for all pubs and restaurants.

From Friday, residents in these areas banned from socialising in homes or gardens with people outside their own households or support bubble, while food and drink venues will be restricted to table service only.

The cabinet minister said the data showed the needed to “act now”, adding, “I know these decisions have a real impact on families, on businesses and on local communities but I can tell everyone affected, we do not take these decisions lightly.”

Just hours after the restrictions were unveiled, however, problems accessing testing facilities in the Northeast were reported, with dozens of people being turned away from the Doxford Park testing site in Sunderland. Others were forced to wait in long queues, with around 50 cars parked up at the site.

According to separate government figures, more than 18,300 people tested positive for COVID-19 in the latest weekly analysis – an increase of 167 percent compared to the end of August.

There was also a 27 percent increase in the number of people getting tested in the week to 9 September, with over 570,000 people overall getting a test.