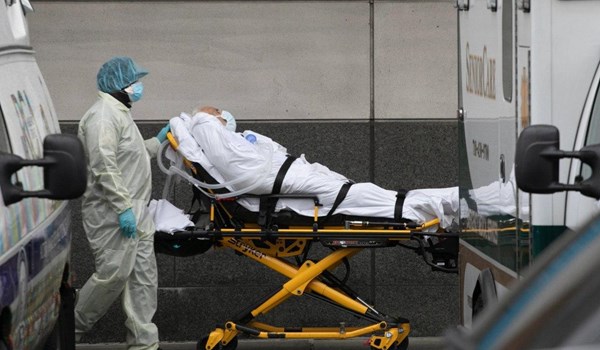 TEHRAN (FNA)- The total number of novel coronavirus fatalities in the US was a world-leading 198,886 as of Friday, according to the latest NBC News figures, while the country also leads the world with 6.7 million confirmed virus cases.

With people dying in the US at a rate of about 790 per day, the total death toll was likely to eclipse 200,000 sometime over the weekend, NBC News was projecting.

With the US poised to hit that melancholic milestone, President Donald Trump was continuing to face accusations that he lied to the American public about the dangers of the pandemic, after he was caught on tape in February privately telling the journalist Bob Woodward that COVID-19 was “deadly stuff”.

Dr. Thomas Frieden, a former director of the federal Centers for Disease Control and Prevention, said Friday that Trump has spent much of the last seven months “fighting science, not the virus”.

“Because of that, we’re hitting 200,000 recorded deaths and, quite frankly, there’s more deaths than that in the US,” Frieden told MSNBC’s Stephanie Ruhle, adding, “Many, if not most of those, were preventable.”

Trump, Frieden stated, is banking on a COVID-19 vaccine and unproven theories like “herd immunity” to end this crisis.

“This idea that a vaccine is going to come and everything is going to be fine, or we’re going to get herd immunity, I feel like the administration is saying immunity is around the corner," Frieden said, adding, “It’s not. We’re going to have this virus with us for a long time.”

While Trump has denied lying to the country, in the months that followed that Woodward interview he dismissed the pandemic as a Democratic “hoax”, spread misinformation about COVID-19, contradicted his own public health experts, and politicized the wearing of masks by refusing to wear one for several months.

As recently as July, Trump insisted the pandemic would “just disappear”.

Meanwhile, critics say his administration was slow to respond to the pandemic. Trump didn’t declare a national emergency until March 13 and accelerated the crisis by pressuring Republican governors to reopen their states in April and May just as the outbreak was picking up steam in the Sun Belt and the South.

New York has reported the most COVID-19 deaths with 33,917 as of Friday. But most of those happened in the early days of the pandemic when public health officials were still trying to figure out how to contain the crisis. Now the state boasts an infection rate of under 1 percent, while 10 more deaths were reported overnight.

“We went from the highest infection rate to one of the lowest, and that’s a testament to the hard work of New Yorkers who came together and flattened the curve,” New York Gov. Andrew Cuomo noted.

Texas has reported the most coronavirus deaths in the last two months with more than 10,000, NBC News numbers show. Since the start of the pandemic, the Lone Star State has reported 14,920 fatalities out of a total 710,231 confirmed cases.

Adjusted by population, Mississippi has proportionally had the most deaths in the last two months. It has reported 2,780 fatalities and 91,935 cases.

Other states that have seen the biggest spikes in COVID-19 deaths during the past two months are Florida, South Carolina and Louisiana.

More than 30 million coronavirus cases have been reported worldwide, according to the Johns Hopkins University COVID-19 dashboard. The US accounts for more than a fifth of those cases and about a fifth of the world’s 952,400 fatalities.