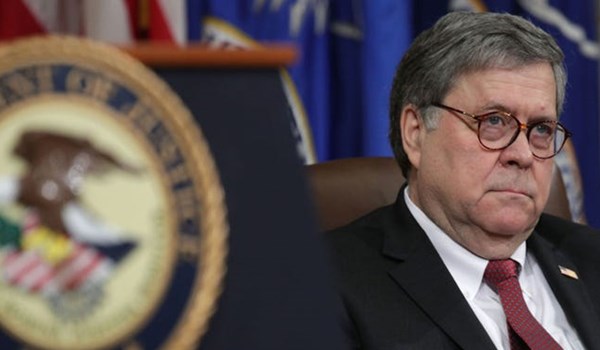 TEHRAN (FNA)- Four House committee chairs are calling on the Justice Department watchdog to open an emergency investigation into whether Attorney General William Barr and other political appointees have improperly influenced the upcoming 2020 presidential election.

“Attorney General Barr has signaled repeatedly that he is likely to allow DOJ to take prosecutorial actions, make public disclosures, and even issue reports before the presidential election in November. Such actions clearly appear intended to benefit President [Donald] Trump politically,” the top Democrats wrote to Horowitz.

“Few actions would prove more damaging to public confidence in the integrity of the DOJ and our democratic process than the perception that federal prosecutorial power can be used to prejudice a pending investigation or influence an upcoming election. As such, we believe it is imperative that this matter be immediately investigated, that you inform our Committees of your decision to open an investigation, and that you report the results promptly to our Committees," they continued.

In particular, Democrats claim Barr and US Attorney John Durham have made several public comments on an investigation into the origins of the Russia investigation that they say could violate this Department policy and related guidelines, and they pointed to the possibility of the DOJ releasing a report or summary within 60 days of the election as an action that could influence the election.

The Democrats noted that a DOJ manual says neither the agency nor its personnel may confirm or comment on ongoing investigations before charges are publicly filed, and that a memo from the agency says that “prosecutors may never select the timing of investigative steps or criminal charges for the purpose of affecting any election, or for the purpose of giving an advantage or disadvantage to any candidate or political party”.

They also pointed to a previous report in 2018 authored by Barr where he said law enforcement and prosecutorial activities must be avoided when close to an election, “typically within 60 or 90 days of Election Day.”

In urging Horowitz to examine the matter, they claim Barr has changed this view on these policies, citing an interview earlier this year with conservative radio host Hugh Hewitt.

“I think in its core, the idea is you don’t go after candidates. You don’t indict candidates or perhaps someone that’s sufficiently close to a candidate, that it’s essentially the same, you know, within a certain number of days before an election. But you know, as I say, I don’t think any of the people whose actions are under review by Durham fall into that category,” Barr stated during the interview in April.

“That’s big news to me. I had assumed that they would be in the category of people that could not be indicted given the obvious connection to President Trump,” Hewitt replied.

Democrats are asking Horowitz to examine a range of matters, including whether Barr violated DOJ’s policies and procedures related to the Durham probe; how a report released by Durham before the 2020 election would comply with the agency’s policies related to actions near an upcoming election; and how the DOJ has implemented Horowitz’s 2018 recommendations that stemmed from actions by the FBI and DOJ in 2016. They are also calling for an examination of Durham’s legal authority and whether he has the “authority to issue a public report about a subject who has not yet been charged in a federal court”.

Their letter comes after Democrats on the Senate Judiciary Committee, led by the panel's Ranking Member Sen. Dianne Feinstein (D-Calif.), also similarly called on Horowitz on Thursday to examine Durham’s probe and possible political interference in the 2020 election.