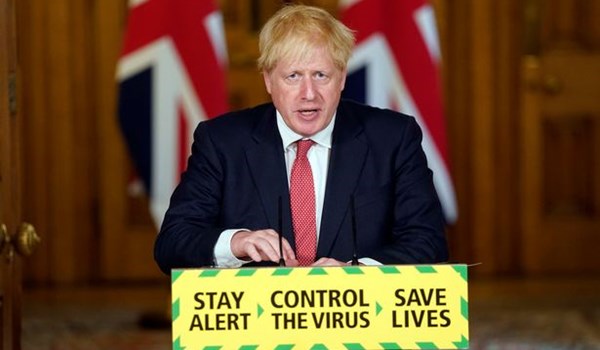 TEHRAN (FNA)- Britain is entering a second wave of coronavirus, Prime Minister Boris Johnson said as scientists expressed fears the death toll could be as high as in the first spike without a rapid change in public behaviour.

The prime minister is prepared to impose sweeping nationwide measures to curb the spread of COVID-19, it is understood, The Guardian reported.

About 13.5 million people in the UK – one in five – are already facing local lockdowns after the government introduced new measures in parts of the North-West, Yorkshire and the Midlands.

Speaking during a visit to Oxfordshire, Johnson said, “We are now seeing a second wave coming in. We’ve seen it in France, in Spain, across Europe. It’s been absolutely inevitable, I’m afraid, that we would see it in this country.”

He added, “We want to keep the schools open – that’s going to happen. And we’ll try and keep all parts of the economy open, as far as we possibly can. I don’t think anybody wants to go into a second lockdown."

“But clearly, when you look at what is happening, you’ve got to wonder whether we need to go further than the rule of six that we brought in on Monday. We’ll be looking at the local lockdowns we’ve got in large parts of the country now, and see what we can do to intensify things,” he added.

With cases doubling in the space of a week and positive tests surpassing 4,000 on Friday, Downing Street is considering a drastic escalation to create what a government source called a “breathing space”.

One England-wide option under consideration is a “circuit-breaker” that could see pubs and restaurants forced to close early or go takeaway-only for a short fixed period, and families told not to mix. Schools would be expected to remain open after Johnson declared keeping children in the classroom a “national priority”.

The purpose of a circuit breaker would be to drive new infections down fast, potentially halving them in a fortnight, an expert said. Ministers hope the “rule of six” limiting the size of social gatherings across England will begin to have an impact by the end of next week but have not ruled out acting earlier.

An announcement of fresh measures could come as soon as next Tuesday, potentially in an address to the nation by the prime minister, after plans have been rubber-stamped by cabinet.

Government sources denied any new measures would amount to a second national lockdown, which Johnson has described as the “nuclear” option.

Official figures showed 4,322 people tested positive for the virus on Friday, a week after exceeding 3,000 for the first time since May. The latest ONS survey of randomly selected people, watched closely by ministers, suggested almost 60,000 had the virus from 4 to 10 September – one in every 900 people – with about 6,000 new cases per day.

While most new infections in the UK are in younger people, the Guardian understands that senior scientists are worried the disease will spread into more vulnerable groups, causing the death toll to soar.

One scientist, who declined to be named, said there was deep concern that “if we keep behaving as we are at present, we will end up killing as many, or more, than we did in the first wave”. More than 57,000 have died with confirmed or suspected COVID-19 in the UK.

The Labour leader, Keir Starmer, signalled that his party would support new controls.

“I am deeply concerned about the sharp rise in coronavirus cases and the difficulties people across the country are facing getting a test,” he said, adding, “There is mounting concern about whether we have got the virus sufficiently under control."

“This is the time for swift, decisive national action. We cannot afford to be too slow,” he added.

Even if the measures are shortlived, they would mark a dramatic reversal weeks after chancellor Rishi Sunak urged the public to “eat out to help out” and Johnson insisted workers should return to the office.

Since then, the £10bln test-and-trace system has been beset by problems, with demand for tests outstripping supply by three or four times. There are also concerns about whether people are self-isolating after a positive test result or coming into contact with a COVID-19 sufferer.

Since the easing of lockdown measures, the UK’s strategy for controlling the virus has been to contain local hotspots but cases are now rising across the country and across age groups.

On Friday night the mayor of London, Sadiq Khan, warned it was likely restrictions would be needed in the capital.

“I am extremely concerned by the latest evidence I’ve seen today from public health experts about the accelerating speed at which COVID-19 is now spreading here in London. This is made worse by the uncertainty caused by the lack of testing capacity in the capital,” he said.

He said he was talking to health and council leaders and “considering some of the measures which have already been imposed in other parts of the UK”.

The Scottish First Minister, Nicola Sturgeon, said she was considering new restrictions in “a critical moment for us to take decisions about the additional steps we need”.

She and the Welsh First Minister, Mark Drakeford, called for discussions with Johnson, with Drakeford complaining of a “vacancy” at the top of the Westminster government.

The notion of a circuit breaker – or partial lockdown – can be traced to Singapore, where it saw schools and all but essential workplaces closed, as well as restrictions on restaurants and other public places.