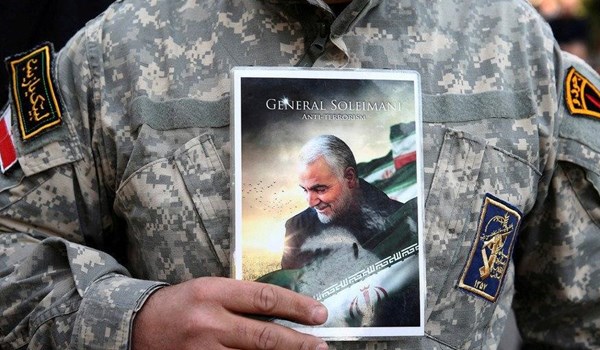 TEHRAN (FNA)- Deputy Commander of Khatam al-Anbiya Headquarters for Assessment Affairs Brigadier General Abdol Ali Pourshasb said that the US assassinated former Commander of the Islamic Revolution Guards Corps (IRGC) Lieutenant General Qassem Soleimani to make up for failure of its plots in the region.

“The US had a plot named the Greater Middle-East. It started implementation of its plot by means of the ISIL but its plots fell flat. The US took the revenge of its failed plot from General Soliemeni,” General Pourshasb said.

He described the US assassination of General Soleimeni as a “stupid decision” which will make Washington pay a heavy price, and said the US has so far made many wrong decisions, including attacking Iraq, Afghanistan and Vietnam.

General Pourshasb also said that Washington had in the past 15 years intended to attack Iran two times but it was dissuaded after assessing the country’s high power to retaliate.

In relevant remarks earlier today, Commander of the Islamic Revolution Guards Corps Major General Hossein Salami warned that Iran is resolved to retaliate for the US assassination of General Soleimani, and said that all collaborators in the terrorist act are potential targets.

“Mr. Trump, Do not doubt about our revenge because it is completely destined and serious,” General Salami said, addressing IRGC commanders and officials in Tehran on Saturday.

Iran will take revenge in a fair manner, he added, noting, “This is why we did not target your soldiers at Ein al Assad.”

“We will target those who have had a direct or indirect role in the martyrdom of Lieutenant General Qassem Soleimani,” General Salami said.

“Do you think that we will target a female ambassador in ransom for the blood of our martyr,” asked Salami, referring to US media allegations that Iran had plotted to assassinate US ambassador to South Africa in revenge for the assassination of General Soleimani.

“Americans should know that we will target anyone who has had a role in the cowardly assassination of General Soleimani and this is a serious warning,” he said.

“You are threatening us with an attack 1000-times greater in force, while being stranded in your internal problems, but when we targeted Ain al Asad, we were assuming that you would respond and had then made hundreds of missiles ready to destroy targets in case you would respond,” General Salami said.

He underlined that the US is given a crushing retaliation if it even damages “one hair” of an Iranian national.

“These are serious warnings. We do not engage in a war of words, but we leave everything to the field of action,” General Salami said.

He added that today the US has lost its past military power and has been isolated in the world.

In relevant remarks last Tuesday, Iranian Government Spokesman Ali Rabiyee said the US has made the biggest strategic mistake by assassinating General Soleimani, and underlined once again that Tehran will give a strong response to the terror attack.

Iran on Monday strongly rejected a report released by the US media claiming that the country was weighing plans to kill the American ambassador to South Africa to take revenge for Washington’s assassination of General Soleimeni.

“Such baseless remarks are part of the Trump administration’s counter-intelligence campaign against Iran. The US regime’s resort to allegations and lies against Iran on the threshold of the US presidential election and concurrent with its pressures to use the UN Security Council mechanisms with the aim of increasing pressure on the Iranian nation was predictable,” Foreign Ministry Spokesman Saeed Khatibzadeh said.

Khatibzadeh described Iran as a responsible member of the international society which has proved its commitment to the international diplomatic principles and norms, saying that it is the US and the current regime in the White House that has implemented tens of assassination plots and military interventions in other countries in recent years, an instance of which was the assassination of General Soleimani in Iraq.