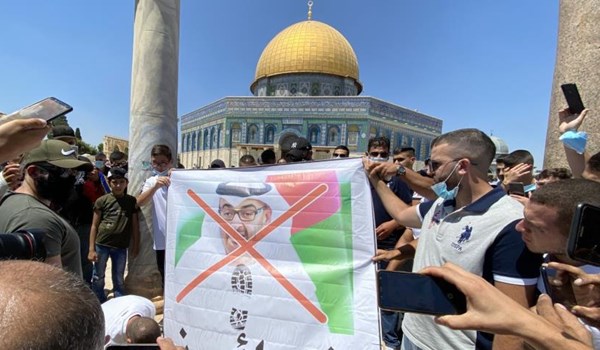 The worshipers organized a protest after the prayers to denounce the agreement signed by the UAE and Bahrain with the Israeli occupation state under US sponsorship, Palinfo reported.

The demonstrators carried banners and posters denouncing normalization and chanted slogans calling for the protection of the Al-Aqsa Mosque from the occupation's plans.

These activities come in response to the unified national leadership's call for popular resistance, considering Friday a day of popular anger and rejection in the homeland. On this day, the Palestinian flag is raised in all villages, cities and refugee camps in the homeland denouncing and rejecting the normalization agreement.

Sheikh Muhammad Salim, the preacher of the Al-Aqsa Mosque, affirmed during the Friday sermon that the right of Muslims to Al-Aqsa is a religious, historical, and political one because Palestine is the land of Isra and Mi’raj.

The preacher of Al-Aqsa called for steadfastness on this land, stressing the importance of unity among the Palestinian people because in disagreement there is an ongoing evil and unity is permanent good.

The Palestinian Unified National Popular Resistance Command had announced the launch of its programs and activities based on the decisions of the Conference of Secretaries-General of the Palestinian factions two weeks ago.