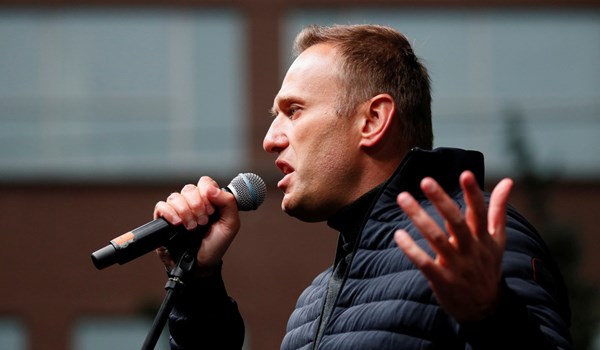 Commenting on the reports that traces of a Novichok-class substance had allegedly been found on a bottle in Navalny’s hotel room, Peskov stated, "We cannot explain this, because this bottle, if it ever existed, had been taken somewhere in Germany or elsewhere."

"This means that an object that could serve as an evidence of poisoning has been shipped away. This is yet another question: why and so on," he added.

Having no chance to study the bottle itself, Russian specialists cannot say anything, Peskov noted.

The Kremlin Spokesman also cited toxicology experts who say that, if such a bottle with traces of a combat nerve agent ever existed, it is highly unlikely anyone would have been able to take it anywhere.

"The amount of the absurd and the number of questions keeps growing every day. The only thing that could shed some light on what happened is exchange of information, exchange of biological materials, exchange of evidence and joint work, including that of medics, and so forth, on analyzing the situation," the spokesman insisted.

Peskov was not clear whether the investigators and the intelligence agencies attempted to recreate Navalny’s route and identify objects that Navalny could have touched.

"I cannot tell you. We don’t do investigations in the Kremlin," he added.

"If there had been any traces of chemical weapons on Russian territory, then, of course, the president would have been briefed immediately. That would have been a total emergency," the spokesman underscored.

"The thing is that we are told: ‘here are the Novichok traces on the bottle.’ But a specialist says that, if there were traces of the Novichok on the bottle, then people, who touched it or at least were nearby, could have been affected. This totally contradicts the conclusions of the experts," he underlined.

"If there was a bottle, why was it transported somewhere? Then maybe, someone does not want an investigation to take place?" Peskov went on, adding, "I don’t know if our law enforcement seeks to find this out or not."

Moscow keeps trying to obtain the results of tests of Navalny from the Organization for the Prohibition ​​​​​​of Chemical Weapons (OPCW), but to no avail, the Kremlin spokesman revealed.

"What I said perfectly reflects the current situation; yet still, we do not abandon our attempts to talk to our counterparts in the [OPCW] Technical Secretariat and in Berlin," the spokesman stated.

Peskov refrained from commenting on the remarks made by State Duma (parliament's lower house) Speaker Vyacheslav Volodin regarding possible involvement of foreign intelligence agencies in the alleged poisoning of Navalny.

The spokesman told journalists Friday that there are currently more questions than answers about the case.

"We cannot state either our agreement or disagreement with [Volodin]. There are more questions arising in this case than we get answers," Peskov said.

He pointed out that Moscow has very limited options to investigate the incident, "because, as it turned out, some items have been moved from Russia, and there is no way to study the examination results."

The Kremlin has no information whether the Russian opposition figure who was hospitalized in Omsk, Siberia, cooperates with foreign intelligence services, Peskov went on.

"I cannot answer this question because I don’t have this information," Peskov said.

Peskov also recalled that the poisoning version was on the table from the very start.

Peskov assured that Russia is concerned over the information that comes from Berlin.

"They say that the examination revealed that is poisoning. Laboratories from France and Sweden have come to the same conclusion," the spokesman underlined.

Meanwhile, Russia has no way to study the examination results "either because our Berlin colleagues do not want it, or because the patient himself does not want it".

"All this raises questions. We cannot answer these questions now, but all this complicates our attempts to find out what actually happened," Peskov concluded.

On Thursday, Russian Foreign Ministry Spokeswoman Maria Zakharova stated that the idea of naming the European Union’s new human rights sanctions after Navalny is aimed at directing the restrictions against Moscow, commenting on EU High Representative for Foreign Affairs and Security Policy Josep Borrell’s initiative on the matter.

"We view initiatives on naming new EU sanctions after Navalny as an overt attempt to direct them against Russia," she pointed out.

According to Zakharova, certain political forces in the EU are boosting an information campaign aimed at making sure that Brussels won’t backpedal on its destructive policy towards Moscow.

"We expect that common sense will prevail in the European Union, so that our partners will abandon the practice of passing the buck randomly and will draw conclusions only from documented facts in the future," the Russian diplomat stressed.

She noted that Moscow’s calls on Berlin to cooperate in sorting out the Navalny incident were being ignored under flimsy excuses.

Borrell earlier told the European Parliament that the EU was working on human rights sanctions that could be called the ‘Navalny sanctions regime’ "in the same way that the Americans call it the 'Magnitsky Act’".

On August 20, a plane carrying Navalny made an emergency landing in the Russian city of Omsk after the blogger had suddenly felt unwell in mid-flight. Navalny was taken to the hospital in a coma and was hooked up to a ventilator. On August 22, he was flown to Germany for treatment at Berlin’s Charite hospital.

The German government announced on September 2, citing the results of a toxicological analysis carried out by Bundeswehr experts, that Navalny had been poisoned with a Novichok nerve agent. Peskov stated that Moscow was ready to fully cooperate with Berlin. Zakharova, in turn, noted that Germany had failed to provide any evidence of poisoning.