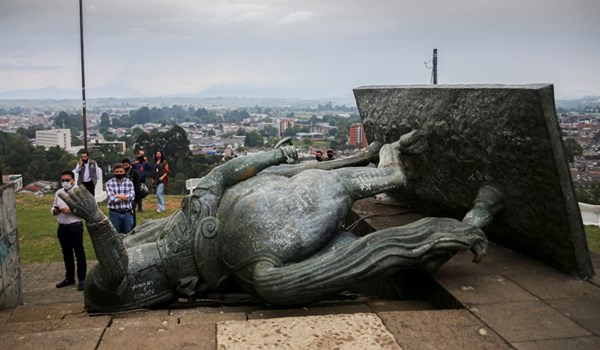 The incident follows a wave of similar attacks on historical monuments in the US, RT reported.

Videos from the scene show activists pulling down the large equestrian statue on a hill near the Western town of Popayan, cheering after it falls from a high plinth. They stood on the sculpture as it was lying on the ground and hit it with rocks. Police officers in riot gear were present nearby but did not interfere.

According to reports, the activists were members of the Guambiano indigenous community, also known as Misak. Local community leader Martha Peralta said that Belalcazar was responsible for the “genocide” of the local population.

She added that the destruction of the statue was “an act of courage after the 527 [years] of humiliation”, likely referring to the discovery of America by Christopher Columbus in 1493.

She wrote on social media that the action was a way of “reclaiming the memory of the ancestors killed and enslaved by the elites”.

The incident follows a wave of statue-toppling that started in the US and has continued throughout several major Western nations, along with protests for racial justice.

Black Lives Matter activists and their allies have been destroying and defacing statues of Confederate generals and other historical figures linked to slavery and colonialism. The movement became a topic of contentious debate in the US, receiving both praise and criticism for its messaging and methods.