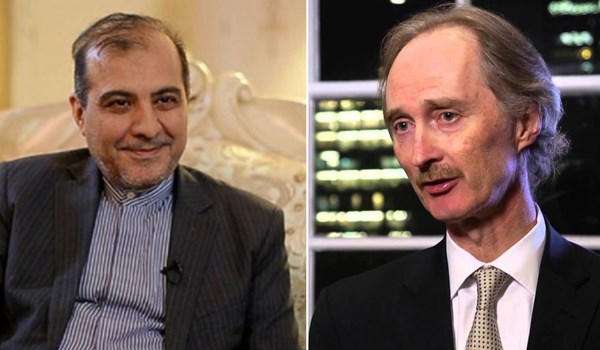 During the phone talks on Wednesday, Khaji underlined the need for the implementation of Idlib agreements in line with tranquility and preventing the re-emergence of the tensions.

Pederson, for his part, explained about different issues related to Syria's Constitution Committee, the situation in Idlib, and the humanitarian conditions.

The two sides once again voiced their support for the promotion of the political trend and the continuation of the work by the Syrian Constitutional Committee.

Pederson and Khaji called for help by the international community to the Syrian people given the difficult humanitarian conditions, especially during the coronavirus outbreak.

Late in August, Khaji in a meeting with Pedersen had underlined Iran’s support for the political settlement of the crisis in Syria as well as the constitutional committee’s talks.

During the meeting in Geneva, Khaji and Pedersen discussed the latest developments in Syria, specially the Geneva talks.

Khaji, for his part, stressed Iran’s support for the political settlement of the crisis in Syria and continued talks by the constitutional committee.

Pedersen appreciated Iran’s role in supporting the constitutional committee, and voiced pleasure in the result of talks in Geneva.