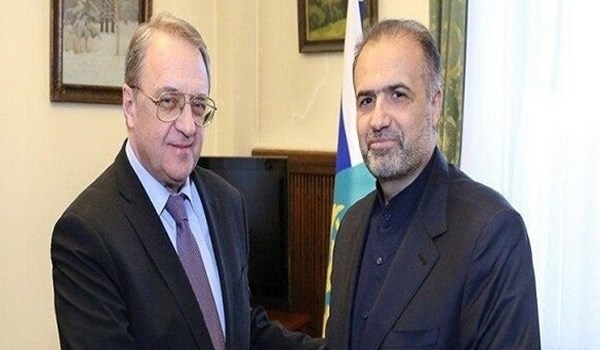 TEHRAN (FNA)- Iran’s Ambassador to Russia Kazzem Jalali and Russian President Vladimir Putin's Envoy for the Middle East Mikhail Bogdanov in a meeting in Moscow on Tuesday discussed mutual cooperation and the latest developments in the region, specially Syria.

During the meeting in the Russian capital today, the two sides also exchanged views on the Astana Peace Process on Syria, as well as the developments regarding Palestine, and Iran’s nuclear deal.

Jalali and Bogdanov stressed the need for continued cooperation and consultations between Tehran and Moscow over regional issues, calling for constant contacts and meetings in the future.

In a relevant development in early April, Jalali and Bogdanov had also reviewed regional developments, specially the current situation in Iraq.

During a phone conversation, Jalali and Bogdanov described the US' moves in Iraq as dangerous for the entire Middle East.

Bogdanov, meantime, voiced Russian Federation's tendency to continue consultations with Iran on the latest developments in the Middle East, Iraq in particular.

The Russian diplomat described the situation in Iraq as complicated and stressed the importance of reviewing regional developments.

Jalali, for his part, referred to the US' recent moves in Iraq as a violation of independence, sovereignty, and territorial integrity of that country, and said, "These acts can result in maintaining instability in Iraq and the region.