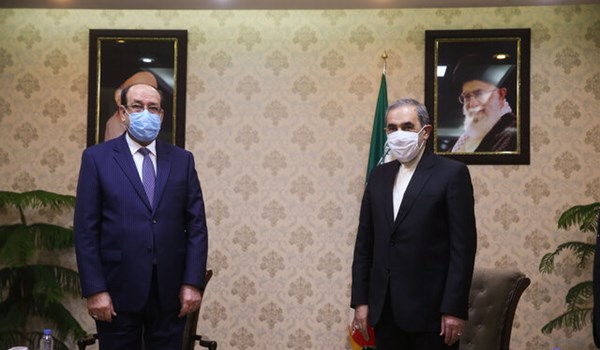 “West Asia is under the influence of brotherly, close and good relations between Iraq and Iran,” Velayati said during a meeting with the former Iraqi Prime Minister and Secretary-General of Dawa party Nouri al-Maleki, calling him a friend who worked hard to advance the interests of the Iraqi people.

He expressed hope that under the leadership of the new Prime Minister, Mustafa al-Kadhimi, Iraqi politicians will be able to resolve the problems of Iraq.

The two officials stressed the need for further expansion of interactions in the light of the 4,000-year-old intertwined historical bond and many cultural commonalities between the two nations.

“Governments will be powerful if the participation and role of their nations are strengthened,” Qalibaf said during his Monday meeting with Nouri al-Maleki, adding that Arab nations will not accept the domination of Zionists unlike their rulers who are normalizing ties with Tel Aviv.

"if we see today that some governments, under the pressure of the Arrogant powers, are seeking to normalize relations with the Zionist regime, their nations should be paid attention to, because these people are not willing to tolerate the domination of the Arrogant," he noted.

“If the officials of countries, especially Muslim countries, fulfill their duties properly, the conspiracies of the enemies will undoubtedly be thwarted,” the speaker stated.

Qalibaf hailed the Iraqi parliament's vote on expulsion of US from Iraq and named it a major step.

Al-Maleki, for his part, expressed gratitude for Iran's continuous support for the Axis of Resistance and establishment of security and stability in the region, especially in Iraq.

"For sure, the stances of the Islamic Republic of Iran have caused the Resistance Front to stand against the conspiracies of the enemies of Islam and Muslims," al-Maleki said.

Expressing dissatisfaction with some Arab regimes’ compromise with Israel, he said, "The process of normalization of ties with the occupiers of al-Quds must be resisted with consensus and convergence."

“I believe that powerful nations can resist the influence of foreigners, so nations will resist if the governments surrender to the enemy’s pressure,” he added.