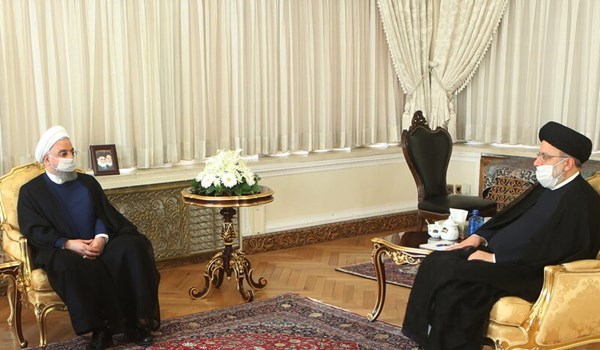 TEHRAN (FNA)- Iranian President Hassan Rouhani underlined that the cooperation among the three branches of power and their coordination can help solve the country's problems faster, specially amid sanctions and the coronavirus outbreak.

"The meetings of the heads of the three branches of power were held for the first time after the formation of the 11th parliament on Sunday and we discussed the country's important issues, mainly economic ones and we also discussed liquidity issues and what programs should be implemented and become operational sooner to direct liquidity in the country to reduce inflation," Rouhani said addressing a press conference after a meeting of Iran's heads of three branches of power.

In a relevant development on Thursday, President Rouhani reiterated that his government wants to pave suitable ways for inauguration of important projects of the country coupled with economic boom and stability.

Referring to the recent economic instructions of Supreme Leader of the Islamic Revolution Ayatollah Seyed Ali Khamenei during the government week in Iran, as well as the compilation of 'Economic Roadmap', he said, "In addition to compensating the damages incurred to the economic sector of the country as a result of sanctions and spread of COVID-19, the government has taken effective steps in line with booming economy of the country."

The government managed to overcome sanctions and plots orchestrated by US against the country especially over the past two and a half years, Rouhani said, adding, “In addition to making efforts to alleviate economic shocks inflicted on people’s livelihood, the government is seeking to continue implementation of development policies of the country.”