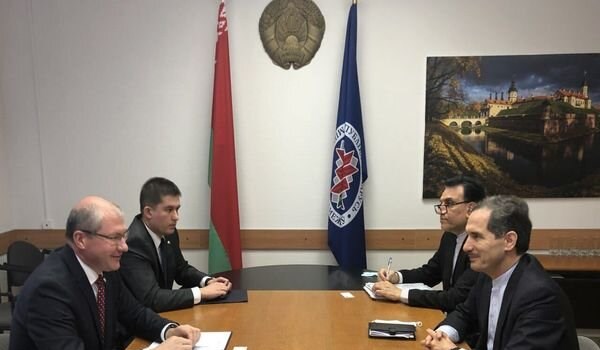 TEHRAN (FNA)- Iranian Ambassador to Minsk Saeed Yari and the Consular Director General of the Belarusian Foreign Ministry Alexander Khainovsky in a meeting stressed the need to finalize an agreement on the transfer of convicts between the two countries.

During the meeting in Minsk on Saturday, the two sides discussed consular issues between the two countries, including visa facilities for businessmen, visa and residence problems of Iranian citizens and transfer of prisoners.

Referring to the good consular relations between the two countries, Khainovsky announced the readiness of the Belarusian Foreign Ministry to prepare for the holding of the "Sixth Joint Consular Commission" between Iran and Belarus in Minsk.

The two sides also stressed the need to finalize an agreement on the transfer of prisoners between the two countries.

The fifth joint consular commission was held in Tehran  in September 2018.

In relevant remarks in July, Iranian First Vice President Es'haq Jahangiri in a message to Belarus Prime Minister Roman Golovchenko underlined his country's interest in the further bolstering of ties and cooperation with Minsk in all fields.

He called for widening of mutual cooperation in various areas, including politics and economy.

Iran's first vice president expressed the hope that the joint efforts made by both countries and by taking advantage of all capacities, friendly relations would be developed.