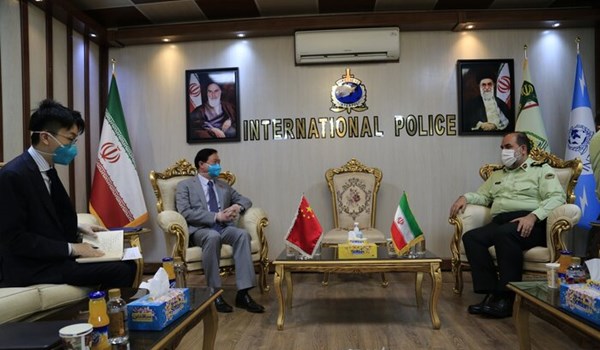 Speaking at a meeting with Chinese envoy to Tehran Chang Hua, Shirzad stressed that Iran's police relations with China are friendly and strategic.

“Iran’s police are eager to transfer experiences to China and set up a police work group between the Chinese police and Ministry of Public Security and the relevant Iranian authorities,” he added.

Referring to the arrangements made by Iran’s police to deal with international defendants, he stressed the need to improve the level of security by using police diplomacy interaction.

“As the police of countries expand interaction, global security will improve and more and more efforts in this field will pave the way for fighting international crimes,” the official added.

Chang Hua, for his part, announced China’s readiness for any cooperation with the Iranian police.

He noted that the development of police diplomacy relations between Iran and China requires bilateral cooperation.

In relevant remarks in early July, Shirzad had also said that Iran was prepared to cooperate with South Korea in the field of police training to boost the fight against international crimes.

Shirzad made the remarks in a meeting with the South Korean envoy to Tehran, Jeong-Hyun Ryuh on Saturday, July4.

Ryuh, for his part, said that South Korea is ready for further cooperation with Iran in different police fields and promotion of relations between the Iranian and South Korean police is essential to develop and enhance security mechanisms.