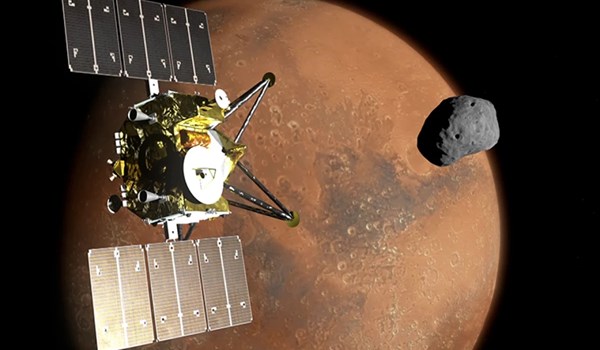 TEHRAN (FNA)- JAXA and Japan Broadcasting Corporation (NHK) have teamed up to develop a "Super Hi-Vision Camera" for JAXA’s Martian Moons eXploration (MMX) mission that will capture the first 8K ultra-high-definition images in orbit around the Red Planet.

The Japan Aerospace Exploration Agency (JAXA) and Japan Broadcasting Corporation (NHK) have teamed up to develop a Super Hi-Vision Camera for JAXA’s Martian Moons eXploration (MMX) mission that will take the first 8K ultra-high-definition images in orbit around the Red Planet.

Space mission imaging has come a long way since the first grainy television images were sent back from lunar orbit in the 1960s. Today, 4K videos stream from the International Space Station (ISS), and even deep space missions like Japan's Hayabusa2 asteroid landing mission have gone high-definition. Aside from producing breathtaking pictures, these have become increasingly powerful tools for space exploration.

Now, JAXA and NHK plan to develop an 8K "Super Hi-Vision Camera" for the space agency's MMX mission, which is scheduled to launch in 2024. Slated to take one year to reach Mars, the unmanned mission will go into orbit around the planet to study the Martian moons Phobos and Deimos. It will also go into a quasi-satellite orbit (QSO) around the Martian moon Phobos, which is not a true orbit around the moon, but rather one that allows it to remain close to it over many orbits. From there, the probe will conduct observations and land and collect samples from the Phobos's surface for return to Earth in 2029.

The hope is that MMX will not only shed light on how the Martian moons formed and evolved, but also serve as a way to test new technologies to aid later planetary missions involving sample collections and return to Earth.

Being built by NHK, the Super Hi-Vision Camera will capture 4K and 8K images, which will be only partially transmitted to Earth. Because of the large file sizes, the complete images won't be available until the complete image data is brought back to Earth stored in a recording device in the return capsule.

The end result will be a digital recreation of the mission with a detail not previously possible.

The video below outlines the MMX mission.

JAXA is currently developing the MMX spacecraft to be launched in JFY 2024, with the aim of clarifying the origin of the Martian moons and the evolutionary p...