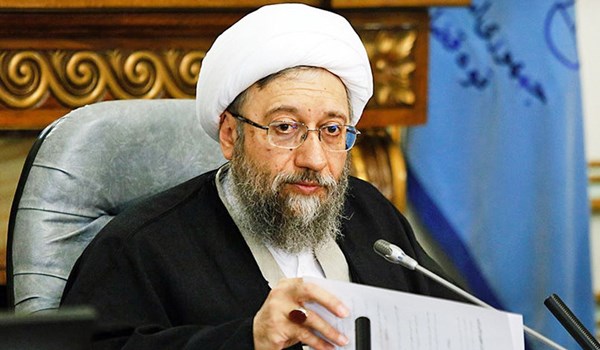 Muslim nations will disturb the dream of normalization of ties with the Zionist regime, Amoli Larijani said on Wednesday, addressing a meeting of the Expediency Council.

He added that the recent agreement was a great betrayal of the right of the oppressed Palestinian nation.

Attempts to normalize relations with the usurper regime of Israel are futile and a great betrayal to the cause of Palestinian and its oppressed people, Amoli Larijani said.

“The fake Zionist regime will not last long and the consequences of recent UAE normalizing tie with Israel will definitely return to them because the path of agreement and normalization of relations with a usurper and fake regime is a blocked and impassable path,” he added.

In relevant remarks on Tuesday, Supreme Leader of the Islamic Revolution Ayatollah Seyed Ali Khamenei lashed out at the UAE for normalizing ties with Israel, describing it as a betrayal of Islam, the Arab and Palestinian people and the regional states.

"The UAE betrayed the world of Islam, the Arab nations, the region’s countries and Palestine. Of course, this betrayal won’t last long," Ayatollah Khamenei said, addressing the directors and heads of the Education Ministry via a videoconference.

"The UAE rulers opened the door of the region to the Zionists, and they have ignored and normalized the question of Palestine, which is a question about the usurpation of a country. This stigma will remain on them," he added.

"The nation of Palestine is under various, severe pressures. Then, the UAE cooperates with the Israelis and the filthy US agents - such as the Zionists in Trump’s family - against the interests of the world of Islam and commits the greatest atrocity against it," Ayatollah Khamenei said.

He expressed the hope that the UAE would wake up soon and compensate for what they’ve done.

Also, last week, the Iranian foreign ministry blasted again the recent compromise deal between Abu Dhabi and Tel Aviv, warning that the UAE should account for any threat posed by Israel to the region.

“The agreement between the UAE and the Zionist regime is a scar on the Muslim world’s body and the UAE has made a big mistake and we hope that it makes up for this mistake as soon as possible. The Muslim world will never forget betrayal of the holy Quds,” Foreign Ministry Spokesman Saeed Khatibzadeh told reporters in Tehran.

He further downsized Israel as a serious threat to Iran, and said it is seen as too small and too weak as a threat, but warned that although Israel is not among the threats perceived by Iran’s defense and security doctrine in the Persian Gulf region, the UAE will be held to account if the regime poses any threat to the region.

Iranian President Hassan Rouhani decried the recent normalization deal between the UAE and Israel, describing it as a gift to Trump before elections.

“These days we have faced a neighboring country which has approached the enemy of the Islamic world and the region and the murderer of the Palestinian nation in a decision to get close to the Zionist regime,” Rouhani said, addressing a meeting of the national coronavirus campaign headquarters in Tehran last month.

In a relevant statement on August 14, the Iranian foreign ministry strongly condemned the UAE's decision to set up diplomatic relations with "the Zionist regime of Israel" and termed it as a strategic act of idiocy by Abu Dhabi and Tel Aviv which will undoubtedly result in the further reinvigoration of the axis of resistance in the region.