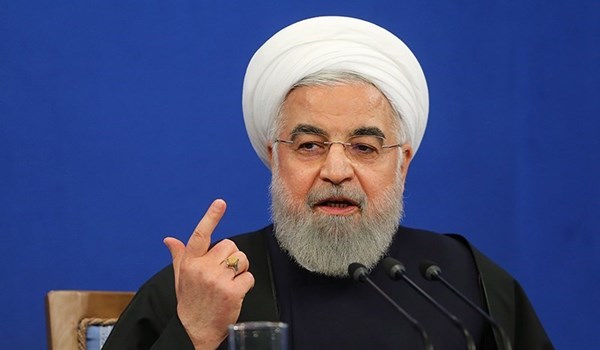 TEHRAN (FNA)- Iranian President Hassan Rouhani said that the US has not been able to successfully implement its plots and strategies against Iran.

Rouhani made the remarks on Thursday in the opening ceremony of four major water and electricity projects in the three provinces of Kermanshah, East Azarbaijan, and Ardabil.

Rouhani appreciated the efforts made in the water and electricity sector, and noted that almost all Iranians in cities and more than 99% of rural areas use electricity.

He went on to say that providing the rural areas with basic opportunities including, water, electricity, education, roads, telecommunications, and gas is necessary.

Rouhani further noted that Iran is capable of constructing one reservoir dam every 50 days and connecting 30 villages to a safe and sustainable water network every week.

Noting that US strategies against Iran have failed, the President also said that the country is under pressure due to sanctions and every effort will be made to foil the US plots against Iran.

Referring to US failure in UNSC to extend Iran’s Arms Embargo, he emphasized, “The US has suffered great political defeat in recent weeks, and this was unprecedented in the history of the US and the United Nations.”

In relevant remarks last month, Iranian Foreign Minister Mohammad Javad Zarif said it is by no means justifiable for the US to use Dispute Resolution Mechanism with regard to UNSC Resolution 2231.

"US recourse to Dispute Resolution Mechanism in 2231 has NO LEG TO STAND ON," Zarif wrote on his Twitter page.