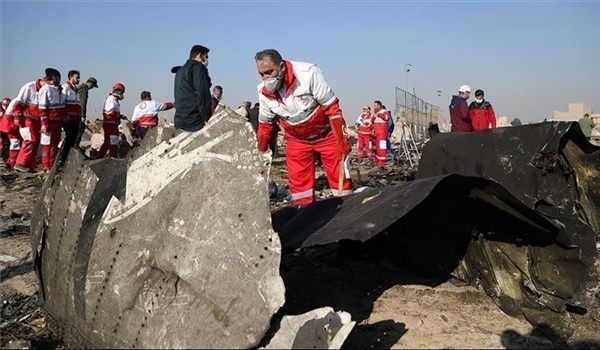 TEHRAN (FNA)- Iran's Ambassador to Ukraine Manouchehr Moradi said his country has suggested October 18-21 as the date for the 2nd round of talks with Ukraine on paying compensation for the downed airplane’s victims, adding that Tehran is waiting for Kiev to confirm the proposed date.

Moradi also said that Iran has interrogated several individuals related to the incident.

"In this incident, all the defendants are military personnel. Six individuals have been arrested, three are in custody and three have been released on bail,” he said, adding, “All affiliated military ranks from the operator and above have been interrogated and dozens were summoned to be questioned."

The envoy stressed that Iran is ready to pay the compensation in accordance with international rules and the conventions to which it is a party.

In relevant remarks last month, Iranian Ambassador to Ukraine Manouchehr Moradi said the compensation for Ukrainian airliner, that was shot down by mistake near Tehran in January, will be paid on international rules and regulations.

In relevant remarks earlier in August, Chairman of Iran Insurance Company Gholamreza Soleimani said a Ukrainian passenger plane that was downed by mistake near Tehran in early January was insured by European companies that are required to pay compensation for it.

"This plane was insured by Ukrainian and European insurance companies, and this issue has nothing to do with Iranian companies," Soleimani said on August 10.

If any compensation is to be paid for the issue, it should be made by [those European] firms that had insured the plane, he stressed.