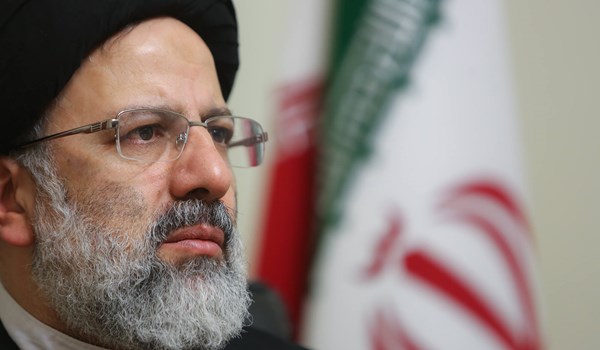 TEHRAN (FNA)- Iran’s Judiciary Chief Seyed Ebrahim Rayeesi lashed out at the US and Europe for supporting and hosting members of terrorist groups, including Mojahedin-e Khalq Organization (MKO, also known as the MEK, PMOI and NCRI), who have killed thousands of Iranian people.

Rayeesi made the remarks on Monday, addressing judiciary officials in Tehran.

“The US has sheltered the murderers of 17,000 Iranian officials and people, while it itself is a terrorist government which has clearly declared that it has assassinated (former) Commander of the Islamic Revolution Guards Corps (IRGC) Quds Force Lieutenant General Qassem Soleimani while he was the official guest of the Iraqi government,” he said.

Rayeesi reiterated the need for a continued legal pursuit into the case of General Soleimani's assassination by the judiciary and the foreign ministry, saying that his blood will cause expulsion of the US from the region by increasing the regional nations’ awareness.

“Over 17,000 oppressed Iranian citizens have been victimized by the terrorist acts and clear and systematic violation of the basic human rights, including the right of living, the right of security and the right of health, by terrorist groups, specially members of Mojahedin-e Khalq Organization,” Elahian wrote in her letter on Monday.

She expressed regret that most terrorists who have been sheltered by the European states are still plotting against the Iranian nation.

“We expect that the European parliament pursues the issue and the European governments act based on good will and the principle of commitment to the international undertakings, support the victims of terror and their family members, provide the victims with access to justice and put the terrorists who live in these countries on trial to end the process of no punishment for the terrorists and take an effective step in the fight against terrorism,” Elahian concluded.

The MKO is listed as a terrorist organization by much of the international community. Its members fled Iran in 1986 for Iraq, where they received support from then dictator Saddam Hussein.

The notorious outfit has carried out numerous attacks against Iranian civilians and government officials for several decades.

In 2012, the US State Department removed the MKO from its list of designated terrorist organizations under intense lobbying by groups associated to Saudi Arabia and other regimes adversarial to Iran.

A few years ago, MKO members were relocated from their Camp Ashraf in Iraq’s Diyala Province to Camp Hurriyet (Camp Liberty), a former US military base in Baghdad, and were later sent to Albania.

Those members, who have managed to escape, have revealed MKO's scandalous means of access to money, almost exclusively coming from Saudi Arabia.

The terrorist organization said it would “welcome” their assassination, adding that it desired for the ranking officials to “join” Asadollah Lajevardi, Tehran’s former chief prosecutor, and Ali Sayyad-Shirazi, a former commander of the Iranian Army’s Ground Forces during Iraq’s 1980-88 war against Iran.

Earlier in June 2019, a leaked audio of a phone conversation between two members of MKO, revealed Saudi Arabia has colluded with the MKO elements to frame Iran for the recent tanker attacks in the Persian Gulf.

In the audio, Shahram Fakhteh, an official member and the person in charge of MKO’s cyber operations, is heard talking with a US-based MKO sympathizer named Daei-ul-Eslam in Persian, IFP news reported.

In this conversation, the two elements discuss the MKO’s efforts to introduce Iran as the culprit behind the tanker attacks in the Persian Gulf, and how the Saudis contacted them to pursue the issue.

“In the past week we did our best to blame the [Iranian] regime for the (oil tanker) blasts. Saudis have called Sister Maryam (Rajavi)’s office to follow up on the results, [to get] a conclusion of what has been done, and the possible consequences,” Fakhteh is heard saying.

“I guess this can have different consequences. It can send the case to the UN Security Council or even result in military intervention. It can have any consequence,” Daei-ul-Eslam says.

Attacks on two commercial oil tankers in the Gulf of Oman on June 13, and an earlier attack on four oil tankers off the UAE’s Fujairah port on May 12, 2019, have escalated tensions in the Middle East and raised the prospect of a military confrontation between Iran and the United States.

The US, Saudi Arabia, and the UAE have rushed to blame Iran for the incidents, with the US military releasing a grainy video it claimed shows Iranian forces in a patrol boat removing an unexploded mine from the side of a Japanese-owned tanker which caught fire earlier this month.

It later released some images of the purported Iranian operation after the video was seriously challenged by experts and Washington’s own allies.

The MKO which is said to be a cult which turns humans into obedient robots, turned against Iran after the 1979 Revolution and has carried out several terrorist attacks killing senior officials in Iran; yet the West which says cultism is wrong and claims to be against terrorism, supports this terrorist group officially.

After the Islamic Revolution in 1979, the MKO began its enmity against Iran by killings over 17,000 Iranians and terrorist activities. Several members of the terrorist group and its leaders are living in France now, freely conducting activities.