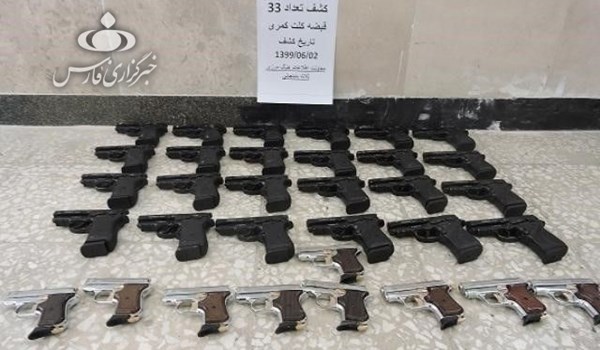 TEHRAN (FNA)- Iranian border guards in the Western province of Kermanshah discovered and seized tens of US-made rifles from smugglers.

“After receiving tips on a possible transit of a weapons and ammunition cargo by smugglers into the country, a team of border guards and intelligence forces at Salas Babajani border area were immediately sent to Chafteh border checkpoint (in Kermanshah province),” an informed source said on Monday.

The source added that the border guards traced the smugglers with the help of electro optical equipment as they were crossing the borderline, noting that the smugglers who faced the Iranian forces’ rapid action left the cargo and fled the mountainous region to the other side of the borders.

According to the source, 33 US-made rifles were discovered and seized in the operations.

In a relevant development on Sunday, Commander of Iran’s Border Guards Brigadier-General Ahmad Ali Goudarzi said that his forces in Saravan region in the Southeastern province of Sistan and Balouchestan have killed a notorious terrorist and wounded several outlaws in armed clashes.