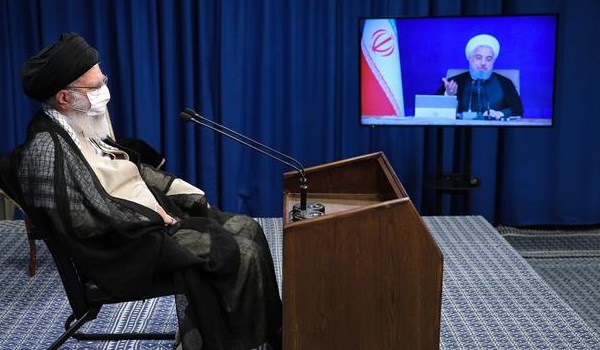 TEHRAN (FNA)- Supreme Leader of the Islamic Revolution Ayatollah Seyed Ali Khamenei said that the acute inefficiencies witnessed in the US have turned the country into a real model of failure in management of the human society.

“Human values ​​such as health, justice and security are being trampled on more in the United States than anywhere else,” Ayatollah Khamenei said in a virtual meeting with President Rouhani and his cabinet members on the occasion of the National Government Week on Sunday.

“The social gap in the US is terrible; the number and proportion of hungry and homeless people in the United States is higher than the rest of the world,” he added.

Referring to the statistics revealed by US presidential candidates in their campaigns, the Leader said, “One out of every five American children is hungry, while insecurity and crime rates in the United States are also very high.”

Referring to the Americans' foreign policy throughout history, he said, "Murder, warmongering and creating insecurity are common actions carried out by the Americans in Syria, Palestine, and Yemen, and before that in Iraq, Afghanistan and areas such as Vietnam and Hiroshima.”

“Such factors and the presence of individuals who are the source of humiliation at the head of the US’ affairs, is another sign of the failure of the Westerners' human and utopian models.”

Elsewhere in his remarks, the Leader called on the government to pave the way for boosting domestic production and reduce reliance on foreign sources.

“Production is key to employment, to livelihood, to reducing inflation, and to boosting the national currency’s value; therefore, we need to exert every effort possible regarding domestic production,” he said.

Addressing the cabinet members, the Leader stressed, “Try to remove the production obstacles; many of such issues pertain to excessive imports, parts [supply] challenges, and inconsistencies in downstream sectors,”

He hailed the considerable developments, including those made by the Defense Ministry and Armed Forces, advising to turn into domestic capabilities to supply the needs of the industry.

"Government Week is an occasion for reporting this year’s governmental services and examining weak and strong points. Speak directly to the people. Tell them about both your achievements and shortcomings, both what you were able to achieve and what you should have done but didn’t."

"Try to finish projects the administration promised to do: projects to construct 600,000 homes, projects of the Ministry of Power and Energy, construction of refineries, measures for knowledge-based companies and actions for combating Coronavirus. All should be pursued seriously."

"Nat’l production is key to employment, welfare, reducing inflation and increasing the power of national currency. An obstacle to production is unneeded imports such as luxury products. Last year, half a billion dollars were spent to import luxury US mobiles. The government must stop this," Ayatollah Khamenei stressed.

Late in July, Iranian President Hassan Rouhani said that inauguration of different infrastructural and economic projects in Iran indicates that enemies' pressures and sanctions have failed to produce the US desired results.

"Despite the pressures put by the enemies, different projects are being inaugurated across Iran every week," President Rouhani said, addressing a ceremony held via videoconference on inauguration of the biggest medium-density fibreboard (MDF) production unit in the Northern Iranian province of Mazandaran.

"The enemies cannot be successful in bringing the nation to their knees," he added.

Elsewhere, Rouhani said that the country is currently passing over the peak of the novel coronavirus epidemic.

"All Iranian provinces, except two, are leaving behind the coronavirus peak," he said, adding, "The correct methods have been applied across the country in the fight against the coronavirus pandemic."

Rouhani appreciated medical personnel for their efforts, sacrifices and dedication during these days, and said, "The country is currently passing over the peak of the novel coronavirus epidemic."