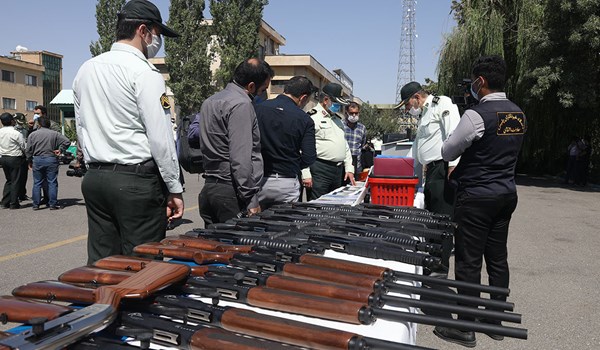 Iran’s intelligence ministry announced on Wednesday that, through broad operations conducted by the ministry’s forces in Alborz province, members of a big arms and ammunition smuggling gang were identified and detained.

This gang has been active in contraband in Alborz, Tehran, Kermanshah, Lorestan, Isfahan, Sistan and Balouchestan, West Azerbaijan and Kerman provinces.

The confessions and documents have revealed that the members of the gang have been smuggling weapons and ammunition, illicit drugs, alcohol, currency, coins, gold and antiques.

More than 20 key members of the gang were arrested in coordination with the judiciary.

The gang members, through counterfeit documents and fake correspondence, would abuse titles of persons in the intelligence ministry, government organizations, the judiciary, and the military.

In a relevant event, the Iranian intelligence ministry announced on August 11 that five spies affiliated to foreign intelligence agencies had been arrested inside the country.

Using complicated intelligence methods, foreign intelligence forces in collaboration with the US’ CIA, Israel’s Mossad and certain European intelligence services were seeking to spy on Iran’s nuclear, political, economic, military and infrastructural projects with the aim of sabotaging infrastructures and projects, exacerbating cruel sanctions, hindering Iran’s access to modern technologies as well as creating challenges in Iran’s ties with other countries, the ministry went on to say.

The intelligence ministry emphasized that wicked moves taken by foreign spying services failed with the vigilance and all-encompassing intelligence dominance of Iran’s forces.

“A number of spies and traitors have been chased and captured by the security forces in recent days,” Esmayeeli told reporters in a press conference in Tehran on Tuesday.

He added that the spies had infiltrated the foreign ministry, the Atomic Energy Organization of Iran (AEOI) and the companies producing parts for the defense ministry, noting that one of the valuable measures adopted in recent days by the security forces was detention of the ringleader of the US-based Tondar (Thunder) terrorist group, Jamshid Sharmahd.

“It is surprising that the countries which claim to be advocates of human rights have turned into a safe haven for the terrorists and they shelter those whose hands are stained with people’s blood and provide them with possibilities and media platforms,” Esmayeeli said.

He added that recently the court has sentenced to 10 years in prison two spies namely Masoud Mosaheb, who operated in disguise as secretary-general of Iran-Austria friendship community and had established ties with foreign spy agencies, and Shahram Shirkhani who was a spy and traded intelligence with Britain in different fields and had attempted to coax the Iranian managers into making anti-Iran moves.

Iran announced on August 1 that it had captured Sharmahd.