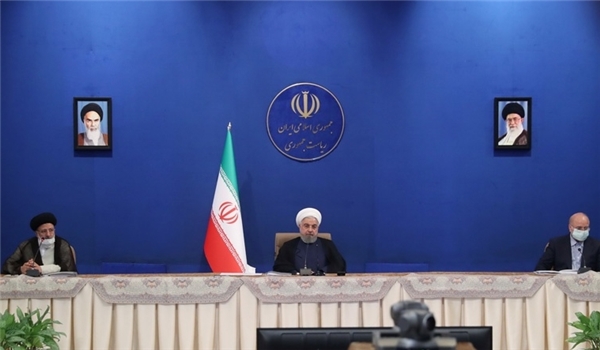 TEHRAN (FNA)- President Hassan Rouhani stated that the Iranian government, with the cooperation of the country's parliament and judiciary, will surely repel the conspiracies of enemies.

President Rouhani made the remarks at the 53rd session of the meeting of the Supreme Economic Coordination Council.

"Overcoming the complex situation created by the outbreak of coronavirus and sanctions on the country requires the adoption of measures and policies that can improve the economic situation," the Iranian president said.

President Rouhani pointed out that in addition to sanctions and pressure, the enemies have sought to create despair, hopelessness, and discouragement about the future among the people.

"All officials should be careful in their words and behavior so that we can thwart the conspiracies of the enemies and spread hope and joy in the society," he added.

In a relevant development in late July, President Rouhani underlined that Iran's enemies, specially the US, have not succeeded in achieving their goal which has been devastating Iran's economy.

"The collapse of the country (Iran) has been the main purpose of the enemy in the economic war, but it has failed to achieve," President Rouhani said.

"The enemy planned on people's trouble even in meeting their basic needs by imposing sanctions and pressure on them," he added.

Referring to the continuing economic pressure of the enemy, Rouhani said: "The government is determined, despite all the pressure, to implement a regular program to meet the foreign exchange needs of basic goods and raw materials and intermediates of production units and create the necessary balance in the foreign exchange market."