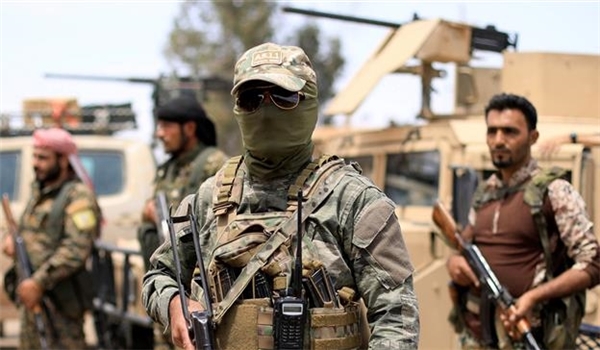 The US-based Rai al-Youm newspaper said on its website on Monday that the tribe of Akidat announced in a statement the formation of a military council and launching popular resistance against the US forces and their allied militants in an apparent direct accusation of the American troops of being behind the assassination of Matshar al-Hafl, a senior member of the tribe.

The statement also accused the SDF of stealing the country’s resources and killing its prominent figures.

According to the statement, the elders and notable members of the tribe had held a meeting to take action against the "American occupiers" and the US-backed mercenaries, and to liberate the Syrian territory.

The statement said they agreed to form a political council and a tribal army - to serve as its military wing - to manage the tribe's affairs in cooperation with the relevant authorities.

It added that the council has begun the practical steps towards the formation of the Akidat army to liberate Syrian territory in coordination with the Syrian army.

The US-led coalition has been conducting airstrikes and operations against what are said to be Daesh (ISIL or ISIS) targets inside Syria since September 2014 without any authorization from the Damascus government or a United Nations mandate. Damascus has repeatedly condemned the airstrikes.

The military alliance has repeatedly been accused of targeting and killing civilians.

The US has dispatched new deployments to the Syrian provinces of Hasaka and Deir Ezzur following President Donald Trump’s October decision to keep hundreds of US troops in Syria to "secure" the country's oilfields which Syrian troops have yet to retake from militants.

Russian Foreign Minister Sergei Lavrov reiterated that US attempts to control Syria’s oilfields were “illegal” and amounted to “robbery”.

Damascus is in great need of its major oil deposits in order to address its energy needs and rebuild the country amid crippling Western sanctions.

The Arab country has been gripped by foreign-backed militancy since March 2011. The Syrian government says the Israeli regime and its Western and regional allies are aiding terrorist groups that are wreaking havoc in the country.

The Arab country is currently extracting oil at only 10 percent of its pre-war capacity.

TEHRAN (FNA)- Iranian experts succeeded in overhauling a 50-year-old Boeing 747 cargo plane amid harsh US sanctions against the country.
﻿
﻿
Sections