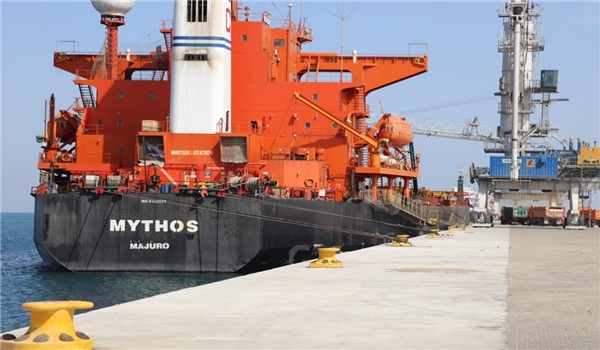 TEHRAN (FNA)- Managing Director of Sistan and Balouchestan Ports and Maritime Department General Behrouz Aqayee said that a Memorandum of Understanding (MoU) has been inked with Afghanistan’s private sector on transit via Chabahar port.

Aqayee made the remarks on Wednesday and noted, “An MoU was signed with the Afghanistan’s private sector at Chabahar port in line with expanding transit and investment cooperation.”

Given the good neighborliness between the two countries, the MoU was signed to develop transit and investment activities of private sector of Afghanistan in the areas of transporting, attracting investor, logistics and transit within the framework of transit rules and regulations of the Islamic Republic of Iran, he further said.

Under the MoU, Afghanistan’s private sector was assigned to transfer country’s transit goods via Shahid Rajaee port in Chabahar to the target markets, the official added.

Transit cooperation between Chabahar port and Afghanistan has grown notably in recent years, he said.

Accordingly, 4 ships, carrying Afghanistan’s transit cargos and two of its nuts cargos were sent to India and China respectively via Shahid Rajaee port.

In relevant remarks in July, Aqayee said that Afghanistan sendt its first shipment to Tianjin port of China through Chabahar in Southeast of Iran.

Behrouz Aqayee said the shipment had been dispatched via Chabahar to Mundra port in India and would be then transited to China.

While, the world is gripped by coronavirus epidemic, it was another record for Chabahar port, Aqayee added.

Afghanistan used to transit its commodities through Karachi in Pakistan to other countries; but now thanks to suitable infrastructures and services in Chabahar port, traders prefer to transport their goods through Chabahar.

Chabahar, Iran’s only oceanic port, is a strategic region on the Persian Gulf and Sea of Oman shores and in North-South Corridor.

He said that the ship carried some 8,875 tons of wheat.

Delhi has planned to donate nearly 75,000 tons of wheat to Kabul via Iranian port city of Chabahar, Aqayee added.

Some 14 cargo ships have carried basic goods for Afghanistan via Shahid Beheshti port in Iranian Southeastern city of Chabahar over the past two years, he had earlier said.