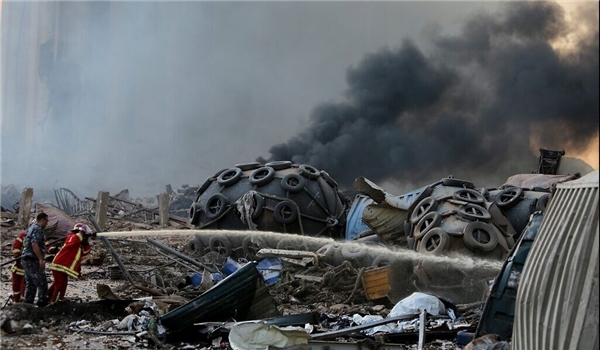 TEHRAN (FNA)- Lebanese Health Minister Hamad Hassan stated the situation in Beirut has been aggravated by the coronavirus crisis, as an enormous explosion killed at least 100 people and wounded several thousand in the Lebanese capital on Tuesday, wreaking havoc on the city.

"There are about 4,000 injured, many of them are still without treatment, as hospitals, located near or outside the capital, lack capacity," Hassan said, according to RIA Novosti.

According to the health minister, four hospitals were completely destroyed by the blast, and their patients were taken to other medical facilities, "exacerbating the issue and turning the crisis into an epidemic health disaster".

Hassan assessed the situation as a "catastrophe in the full sense of this word", taking into consideration the coronavirus pandemic.

"The number of victims is increasing. So far, there are around 100 casualties," the health minister added, specifying that the count of those missing is more than "the number of bodies that have arrived at hospitals".

"Rescue and civil defence teams are still searching for those missing at the site of the explosion, spread over 20 kilometres in Beirut and which resulted in severe damage to hundreds of buildings," Hassan noted.

At the same time, the Beirut's Governor estimates damages from the blast to be around $3-5 billion. He also noted that at least 10 emergency service workers are dead following the explosion.

Over 100 people died and some 4,000 were injured by the blast in Beirut's port. The Lebanese government has declared a three-day mourning period for the victims of the tragedy starting Wednesday, and promised to announce the results of an investigation by the end of the week.