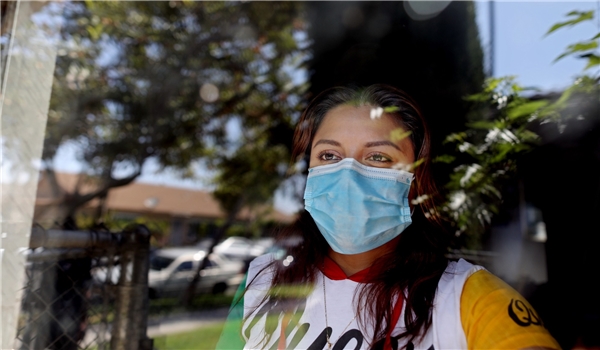 TEHRAN (FNA)- Latinos have a bleaker view of the coronavirus compared to the rest of the US population, in part because they have been disproportionately affected by the economic decline associated with the pandemic, Pew Research Center reported Tuesday.

Even though some states have reopened their economies, 70 percent of Latinos said they believe that the worst of all coronavirus-related problems are still to come, compared to 40 percent of the general US adult population who say the worst of the coronavirus is behind us, according to NBC News.

"With Hispanic households absorbing lost jobs and wages, many have said they may not be able to pay their bills," Pew stated in its report, adding, "Yet even before the outbreak, Hispanics were concerned about their economic situation, despite near record low levels of unemployment through the end of 2019."

Latino unemployment rose sharply to a peak 18.9 percent in April, before dropping to 14.5 percent in June when businesses and schools shut down and many people stayed home as coronavirus spread through the country. Those joblessness levels exceeded the peak unemployment rate for Hispanics in the Great Recession of 2007-2009, which hit 13.9 percent in January 2010.

In addition, the coronavirus is ravaging Latinos in several cities and communities, where Hispanics are disproportionately testing positive and ending up hospitalized.

Only 18 percent of Latinos surveyed by Pew rated US economic conditions as excellent or good in June, down from 49 percent in January.

Latinos' view of the economy could be instrumental to how they vote in the 2020 presidential election. A record low unemployment rate for Latinos had been a key talking point for President Donald Trump and the GOP in its effort to boost Latino support. But Biden and Democrats have seized on the double-digit unemployment to slam Trump's record with Latinos and his handling of the pandemic.

Latinas, who are more likely to support Biden than their male counterparts, saw a particularly steep rise in their unemployment rate, which jumped from 5.5 percent to 20.5 percent between February and April 2020.

For these reasons, Latinos are more likely to support proposals for economic aid amid the coronavirus pandemic, Pew found.

About three-quarters of Latinos, 78 percent, say Congress needs to pass another economic relief bill in addition to the $2 trillion economic assistance package approved by Congress in March and signed by Trump.

Congress is negotiating large differences in the Democrat and Republican proposals for a new assistance package.

Trump has announced he'd like to see stimulus checks of more than the $1,200 each distributed in the last package and a moratorium on evictions.

Many Latinos found themselves on unsteady financial ground even before the coronavirus outbreak, despite the near record low levels of unemployment.

The Great Recession hit Hispanics particularly hard. During the Great Recession, Latino median household wealth plummeted from $18,359 in 2005 to $6,325 in 2009, the largest of any racial or ethnic group, according to Pew Research Center.

Millions of Latino families were just bouncing back from losing 66 percent of their household wealth, lagging far behind their white peers, when the pandemic hit. Now, the coronavirus crisis has either erased or is threatening to erase Latinos’ decade-long climb back to financial stability.

In December 2019, about two-thirds of Hispanics, 64 percent, rated their personal financial situation only fair or poor. That share is comparable with the 66 percent of Hispanics who said so in September 2018, an increase of 59 percent from November 2015.

TEHRAN (FNA)- Western governments and their media outlets have been concocting narratives to sway public opinion in favor of militant groups operating in the Arab country, according to a report.

TEHRAN (FNA)- Venezuelan President Nicolas Maduro called on the United Nations General Assembly to rally against United States sanctions imposed on his country, as well as its allies including Cuba, Nicaragua and Syria.
﻿
﻿
Sections