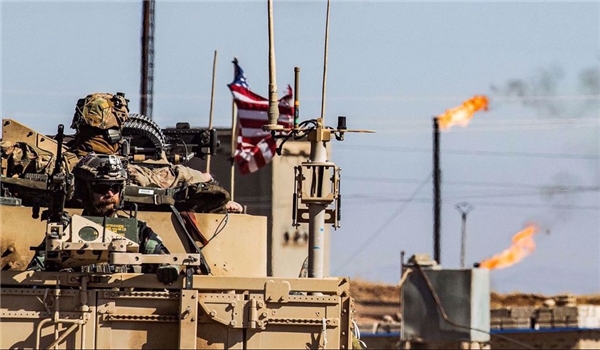 TEHRAN (FNA)- Iranian Foreign Ministry Spokesman Seyed Abbas Mousavi condemned an oil agreement signed between the Kurdish-dominated Syrian Democratic Forces (SDF) and an American company as “a violation of Syrian sovereignty,” and said that such a deal has “no legal validity”.

Last week, US Senator Lindsey Graham and Secretary of State Mike Pompeo referred to an oilfields deal between the SDF and a US firm during a Senate Foreign Relations Committee hearing.

"The deal struck between the SDF and the US, as an illegal and occupying force in the Syrian territory, has no legal validity," Mousavi said.

The Iranian foreign ministry spokesman reiterated that the deal violates international law as well as Syria’s sovereignty and territorial integrity.

“This is yet another step by this country (the US) to plunder Syria's natural resources,” he added.

The SDF is a US-backed alliance of militias that have seized swaths of Syria’s Northern and Eastern regions from the ISIL terrorist group and are refusing to return control of those areas to the Damascus government.

During the hearing, Graham said the SDF informed him that a deal had been signed with an unnamed US company to “modernize the oil fields in northeastern Syria,” and asked Pompeo whether the administration was supportive of it.

“We are,” Pompeo responded. “The deal took a little longer than we had hoped, and now we're in implementation.”

In a statement on Sunday, Syrian Ministry of Foreign Affairs and Expatriates strongly condemned the agreement, which it said is aimed at stealing the country’s oil, stressing that Damascus considers the contract null and void with no legal effect.

The US has long been providing the SDF with arms and military training, calling them a key partner in the purported fight against the ISIL terrorist group. Many observers, however, see the support in the context of Washington’s plans to carve out a foothold in the Arab country in the post-ISIL era.

US President Donald Trump has openly expressed an interest in the oilfields of northeast Syria.

Washington announced a military withdrawal from Syria in December 2018, but Trump later pledged a number of US forces would remain in areas “where they have oil".

TEHRAN (FNA)- The World Health Organization (WHO) warned Friday that the coronavirus is “not going away”, noting that it’s still killing about 50,000 people a week.
﻿
﻿
Sections