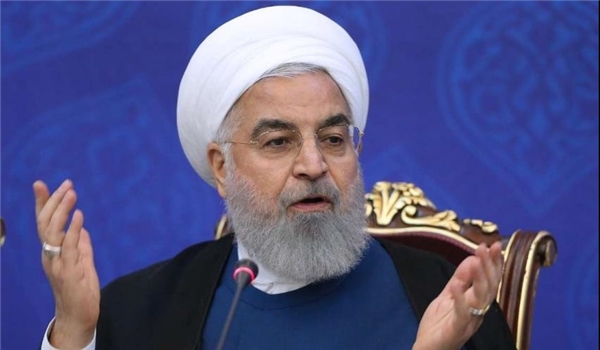 The enemies expected that Iran’s officials would be disappointed in the face of the restrictions due to coronavirus outbreak and imposition of inhumane sanctions on the country, Rouhani said.

He went on to say that national cooperation with the officials has thwarted the plots hatched by ill-wishers and enemies of Iran.

In relevant remarks in July, President Rouhani stressed further cooperation among Iran’s executive, legislative and judiciary branches, and added that the country will overcome US economic war in future.

President Rouhani made the remarks in a Monday July 13 meeting of High Council of Economic Coordination comprising the president, the parliament speaker and judiciary chief.

The council was formed upon an order by Supreme Leader of the Islamic Revolution Ayatollah Seyed Ali Khamenei to tackle major economic issues ensuing the US illegal withdrawal from the JCPOA and re-imposition of cruel sanctions against Iran.

Rouhani said that the Supreme Leader in a session stressed the need for readiness and coordination among all pillars of the country in the face of the enemy's economic war.

Also in early July, he had said that enemies will fail to annihilate Iranian economy, adding that the nation will overcome the current situation.

Enemies are trying to foment psychological war in a futile bid to disrupt Iran's economy, Rouhani said on July 4.